Robbed of his birthright, Arthur comes up the hard way in the back alleys of the city. But once he pulls the sword from the stone, he is forced to acknowledge his true legacy - whether he likes it or not. 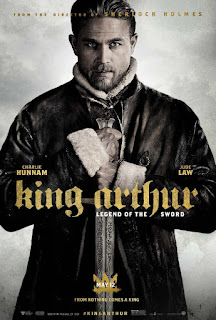 If you came to this movie expecting a slavish reproduction of the timeless classic that's already been done to death, then you're probably one of those farts who're walking away from the film sputtering in self-indignant fury. I went into the cinema today expecting lots of explosions, a killer soundtrack and gratuitous displays of slabs of man meat. I was not disappointed. The only elements that were even remotely related to the legend were the Lady in the Lake, a magic sword, a round table and a castle called Camelot.

But there were ginormous elephant demons, a massive snake that appeared out of nowhere for no apparent reason... Suffice to say, if your evil henchmen are all cosplaying Kylo Ren, they're going to die in droves in the most spectacular fashion (kinda like Stormtroopers, if you think about it). Cue also the awfully flash slo-mo action scenes and distorted sound, and King Arthur (Charlie Hunnam) brooding his way most delightfully through the role of the prince-raised-in-a-brothel-turned-saviour-of-a-kingdom, and this is just oodles of fun to watch. Even the part where he gets carried away by giant vampire bats and fights off oversized rats.

I also really appreciated that there wasn't a gratuitous insta-love sexual attraction by our hero and The Mage (Astrid Bergès-Frisbey) an archetypical the witch of the wilds – who's really absolutely one of the best thing about the film when her eyes roll back and she summons birds animals to do her bidding.

Everything that I absolutely loved about films like Highlander and Lord of the Rings is present (I'm thinking especially of the Boss Fight Scene near the end which made me think of Connor vs. The Kurgan), but only bigger, and way more dramatic, happened in King Arthur: Legend of the Sword. High-brow cinema this is not. King Arthur goes through all the stages of the hero's journey, from denial through to a near-literal romp through the Underworld. Vortigern (Jude Law) is our tragic antagonist, whose lust for power sees him sacrifice everything that he loves to the freaky octopus ladies in exchange for his Boss form as a demon from a Frank Frazetta painting.

The editing and CGI are of the best I've seen in ages, and the world itself feels tactile (and most certainly not the England you'd imagine in history books). Yes, most of the dialogue is just one-liners and doesn't really have any cohesion, but I was not watching this film expecting deep existential answers. And I mean, what was the point of that giant snake? It was cool, but served no purpose other than being super cool.

Switch off your inner critic when you watch King Arthur. It's slick, insane and over the top. Also, it doesn't take itself too seriously. I'm also still ragingly incoherent and jumped up on the salt they put on my popcorn. Don't listen to the haters; just go have a blast. Guy Ritchie raped the legend, and he didn't even need to call it King Arthur, because to say it's based on the legend is a bit of a stretch, but it's still awesome.

Edit: Also, seeing Aidan Gillen was a treat. Some of you may remember him as the devious Petyr "Littlefinger" Baelish from Game of Thrones.
Posted by nerinedorman at 12:24 PM