The Impossible Five by Justin Fox

If I had a Gerald Durrell award on hand to give to Justin Fox for his book The Impossible Five, I'd hand him one for every species he investigates during the course of his research. Justin is one of those rare beasts who can handle fairly serious subject matter (conservation) in a way that is not only highly engaging and sensitively handled, but also filled with touches of humour (I don't think I'll forget his Bugs Bunny asides related to the riverine rabbit in a hurry). 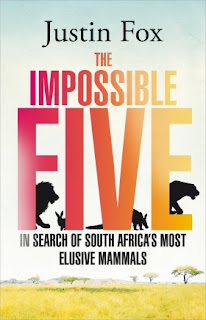 The premise of The Impossible Five is simple: Everyone who goes looking for wildlife sightings in southern Africa seems awfully hung up about the Big Five (lion, leopard, buffalo, rhino and elephant) that Justin felt driven to explore what he'd term his "Impossible Five" of species that are next to impossible to see in the wild. After some thought, he decided that these, for him, are the Cape mountain leopard, the pangolin, the aardvark, white lion and the riverine rabbit.

Not only are these critters elusive, but their continued existence remains in the balance thanks to our own species' continued activity on this planet.

Justin spent weeks in the field, getting to know folks whose passion it is to track and research these animals – from Quinton the leopard man, who walks the length and breadth of the Cederberg, to Linda, for whom the white lions of Timbavati represent something altogether spiritual and magical.

At the heart of this book lies one word: empathy – something that we as a species have collectively lost when it comes to how we interact with our environment. We forget that our ongoing survival is intimately tied into the ultimate fate of the wild things and remaining wilderness.

This is the kind of book that makes me want to pack my bag and go visit some of the locations that had such an impact on me as a child – and I'm sorely overdue a visit to the Cederberg, where my own brush with a leopard was limited to finding a massive paw print superimposed on my own tracks once I'd turned around along a track I'd been hiking.

Justin motivates us to become patrons and keepers of our wild places, to forge a deeper connection to the world around us and gain an intrinsic understanding of the interconnectedness of all things. This really is a wonderful book, and its author is a keen observer of people and animals, as well as being a gifted storyteller. If you enjoyed Douglas Adams and Mark Carwardine's Last Chance to See then most certainly add this one to your collection. Or, if you're like me, and you grew up on a steady diet of 50/50, Gerald Durrell and James Herriot ... then don't miss this one.
Posted by nerinedorman at 1:32 AM