It’s absolutely wonderful to see more SFF being taken on by South African publishers, and Jayne Bauling’s New Keepers is clearly an engaging first novel in what I suspect will turn into a series. Bauling’s post-apocalyptic dystopia sees the survivors of a global catastrophe living in an age dubbed the Prosperity, where every aspect of their lives is controlled by an authoritarian government that provides for all their needs. Society has been stratified into strict castes, each with its own function – the high cost for protection in a hostile world. Only a lucky few are allowed to have children, and you are constantly in fear of being subjected to ominous sounding processes known as Parking or Rinsing. 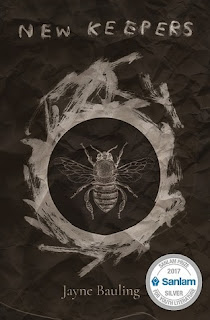 Our protagonist Jabz is a Stain – a particular caste that lives out in the Margins, at the edges of the Prosperity and in the ruins of the old world. He has a gift for knowing which plants can heal, and in his smoke-visions he’s called to a mysterious mountain that exists far out in the wilds. But he can’t do this alone – he has to bring together a team to help him finance the quest, which is why he assembles a ragtag bunch to accompany him. It’s a bit of a Starship Enterprise scenario as the merry band of misfits boldly venture forth into the unknown.

Bauling has a strong narrative voice and it was lovely to read a YA novel that didn’t shy away from the realities of human existence. I did to a degree feel as if the novel lagged somewhat in the start, but considering that a degree of world building was necessary to establish the milieu, and that this is clearly a first book in a series, this is unavoidable. In addition, the cast of characters is large, and I did feel at times that they didn’t truly get an opportunity to shine or have sufficiently fleshed out character arcs. And I understand how difficult this is – keeping the story flowing forward but having enough threads to develop later if you have a bigger picture in mind.

Towards the end, I did feel almost as if the pace hurried a bit too much and that important bits were glossed over – especially in terms of the try/fail cycles that characters experienced. I’d personally have liked to see a bit more tension, more lows and highs to offer contrast within the overarching structure, as well as more detail in terms of action sequences.

These things considered, New Keepers is still a great read that I enjoyed and made me care about the characters; I’m a sucker for imagining post-technological southern Africa and the sort of what ifs that come into being from envisioning possible futures. New Keepers blends the magical with a dystopian future, and I’m curious to see where the author will take Jabz and his friends.
Posted by nerinedorman at 10:16 AM