The Frontier Lord by Duncan M Hamilton was sent to me as a freebie when I joined his mailing list, and it sat there in my Kindle app for a while. I’m glad I gave it a go and it’s a short read, reminiscent of Alexandre Dumas but moving at a far better pace and without all the digressions Dumas is so fond of (yes, I’m not even halfway with the Count of Monte Cristo for the past three-odd years). 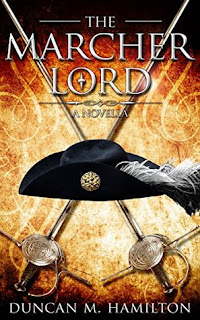 We follow Rolf, whose father is the marquis of a border Marches that are currently under threat from invasion. The marquis is taking his son through to the city of Mirabay so that they can petition the king for assistance. Rolf has never been to the city before, and he’s a good lad, who’s been fighting since a young age. So he’s an experienced warrior, even at the tender age of 19.

Except he’s woefully naive when it comes to the meanderings of high society in the big city. He’s grown up on stories about the legendary Silver Circle who serve the king, noble swordsmen who engage in heroic acts. He’s not prepared for the somewhat foppish gentlemen who challenge him to duels after minor slights get blown out of proportion.

What follows is a whimsical yet also poignant coming of age for this young man, as he navigates Mirabay’s somewhat murky politics. Overall, I enjoyed this novella immensely. It was a light, fun read, despite a few editing gremlins that slipped through (they weren’t enough to become deal breakers for me). I would have liked to see more layered descriptions, but Hamilton’s voice is strong and I loved his characterisation.
Posted by nerinedorman at 4:43 AM