Heartbreaker by Julie Morrigan is one of those books that languished on my TBR pile for far too long. Yes, it’s not SFF. There’s not one whiff of magic or supernatural beasties, but music and the lives of musicians are among my guilty pleasures so this one went right down the hatch for me. Also, this may or may not have something to do with my secret other life as a rock star. But now’s neither the time nor place to get into that. 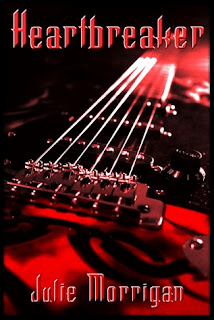 Julie knows her stuff when it comes to the music scene, and her love for rock shines through in this almost fairy tale-like telling of writer Alex, who gets the chance of the lifetime to write the biography of her favourite musician, Johnny Burns. (To give you the idea, it’s the equivalent of me getting asked to be Trent Reznor’s or Brian May’s biographer.)

Sure, Alex tries to play it cool. After all, it’s not like she still has posters of Johnny Burns up on her bedroom wall, right? What follows is a slow burn of a romance with a side order of murder mystery, as Alex digs far deeper than Johnny or any of the remaining members of the band Heartbreaker, and their assorted wives, ex-wives, girlfriends or daughters would have expected.

Julie’s writing style tends to a little dry, but if you love music and an almost matter-of-fact investigation into the past, where no one is willing to speak the truth, at first, then this is an engaging mystery redolent with musical lore related to a band that you could almost swear was real. And coming across as real, this means there aren’t any enormous revelations and ginormous explosions. The characters, and the things they do, feel authentic. Like it could have happened in real life. The book reads a little like a mockumentary, but it hits all the right notes for me – Heartbreaker is a memorable yarn I’ll happily recommend to my fellow music-loving weirdos.

Posted by nerinedorman at 11:31 AM