Guns, Germ, and Steel: The Fates of Human Societies by Jared Diamond

Guns, Germs, and Steel: The Fates of Human Societies by Jared Diamond has been on my TBR for years now. I get the idea that he's one of those writers who elicits extremely strong responses from readers, so I'm going to lay my thoughts down as objectively as possible. The primary reason that I picked up the book in the first place was that I wanted a general 'how it all fits together' type of read that gives broad, general strokes explaining why human civilisation may have taken the turns that it has. 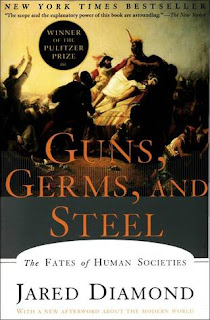 For those of us who're in the habit of world building for science fiction and fantasy fiction, this sort of stuff is valuable.

Diamond approaches his work from the viewpoint of a geographer – so he takes into consideration primarily climate, natural resources and technology, and how these all work together to allow some nations primacy over others. And I'll say this much: he makes some convincing arguments that made me consider how the civilisations that had access to early domestications in terms of staple crops and livestock had many advantages. And it's easy too, to see how these advantages add up and why there are so many factors that, for instance, favour the east-west orientation of Eurasia as opposed to the north-south orientations of the Americas and Africa, and what that would mean for the dispersal of crops and technology.

What Diamond doesn't go into (and perhaps it would be too large for the scope of the book) is discuss the role that ideology played (and still does play) in terms of the growth and spread of particular nations. Or even the reasons why some nations would remain insular. Diamond's approach *is* very western-centric (understandably) and some readers might find his style a tad bit on the patriarchal side.

I tried to look beyond that, purely focusing on the picture he was painting, which certainly gave me much to chew on that I'll be able to apply to my own world building. He has an engaging, informative tone, and it's easy to see how this book met with such widespread acclaim when it was first released. If this sort of thing interests you, I'd say give it a spin, but also do glance at what his detractors say, just so you have a balanced perspective on the work.
Posted by nerinedorman at 1:36 PM