The premise for Tomorrow by Damian Dibben bit me from the start – an immortal hound is separated from his equally immortal owner and spends more than a century searching for him throughout Europe. Tomorrow blends elements of fantasy with luscious prose, through a layered alchemical process that results in a novel that is difficult to pin down. (There’s quite a lot going on beneath the surface.) 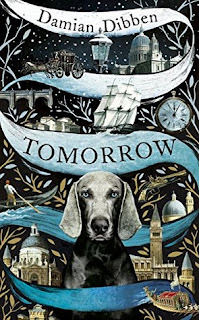 My first thought upon finishing was that Tomorrow reminds me somewhat of Paul Gallico’s classics, such as Jennie or Thomasina, the Cat Who Thought She Was God – both novels my mother inspired me to read when I was little. Granted, it’s been decades since I’ve read any Gallico, so this comparison might just be wishful thinking on my part.

But I’m a sucker for a novel written from an animal’s point of view, and Tomorrow (yes, that’s the dog’s name) offers such an evocative window into Europe between the 1600s and 1800s. At a glance, this story may be about a dog trying desperately to reunite with his owner, but the story is much, much more than that.

A pervading theme makes us question the value of life – would we value our existence if it was limitless? Tomorrow and his master, Valentyne, both enjoy an eternal life that is juxtaposed with the ephemeral; when we meet secondary characters such as the indomitable Sporco or the sensitive Blaise, whose lives are but instants in those of our protagonists, these short-lived characters’ vitality and ‘presentness’ becomes all the more apparent. We examine also the complex relationship between two men – Valentyne and his counterpart Vilder. Each copes with eternity in different ways: Valentyne by working to preserve the lives of others and bring them comfort, and Vilder, by pursuing a more hedonistic, self-centred life. Neither seem to gain any satisfaction through their actions, and through the ages are locked in a love/hate relationship.

We see also, a Europe turned upside down by war, with graphic illustration of the battle of Waterloo and the resultant carnage that is brought to life in such a way that will leave you in no doubt that war is far from noble. Threaded through this is a search for meaning, because a life without the limitations placed upon it by death, can easily become meaningless.

Tomorrow is not a happy read, but it is filled with evocative prose and astute observations. In addition, the novel jumps backwards and forwards in time, and this non-linear execution may be confusing to some. If viewed in a linear way, the plot isn’t all that developed – there are patches that fall flat, and are propped up by the author’s lush style. So, this is more a novel about internal alchemy for Valentyne, in which we are not privy to his thoughts, but we view his journey through the lens of his loyal dog. In that sense, I don’t think this novel is going to be for everyone, but it’s certainly a memorable story that will prey on my mind for a while yet.

Posted by nerinedorman at 10:59 AM