The Book of Life (All Souls Trilogy #3) by Deborah Harkness

While I admit to slogging through books one and two of Deborah Harkness's All Souls trilogy, I'm happy to say that book three bucked the trend for me. Maybe it was because by the time I reached The Book of Life, I was already conversant with the characters and their dynamics so that I didn't mind the slow-moving pace of the story. Perhaps this is my biggest bone to pick with the author – story is sacrificed to a degree while emphasis is placed on the relationships between characters. Thus this wedges the book a little more firmly into romance territory. Which isn't a bad thing in and of itself, but it's not why I was embarked on reading these books in the first place. 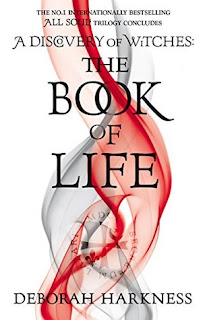 The All Souls trilogy is heir to such luminaries as Anne Rice (before she lost the plot), bringing a more mature, witchy riff on the themes prevalent in Twilight. So that's my *very* basic assessment of what we're sitting with here. I also don't think I'm *quite* the right reader for Harkness's writing. While I love her attention to detail, I sometimes feel that it's misplaced (like in book one where there was a whole detour into vampire dietary requirements).

For all the trilogy's faults, however, I do feel that Harkness does an adequate job of wrapping up all the threads. Despite the 'creature of the week' feel you get when you're introduced to (yet) another daemon, witch or vampire, she does eventually smooth out the narrative. But. But.

Focus. We never feel as if we're running out of time, that there is something seriously at stake until right at the end until a particular antagonist strikes and a protagonist responds in a way that immediately entrenches them as TSTL (I won't spoil). Lack of focus and a plethora of subplots trip this trilogy up time and again.

These days it's difficult to breathe fresh air into the whole contemporary fantasy genre when we're faced with supernatural creatures, and to give credit where it's due, Harkness has built a world that is incredibly rich despite it not deviating far from established tropes (hello, New Orleans, Venice, miss us much?). Her creatures, despite their supernatural leanings, are, at the end of the day, still erring more on the side of human – which may frustrate those who prefer their vampires being a bit more other.

Her focus on her characters and their relationships with each other than narrative development, hamstrings her pace. Her writing is quite all right, and I think if you're looking for a trilogy that will essentially be a historical fantasy soapie, this one will be a pleaser. But I am not that reader.

Posted by nerinedorman at 4:12 AM