What I love about particular fandoms (yes, I'm looking at you, Dragon Age) is that they connect me with likeminded souls. Angela D Mitchell is one such writer, whose thought-provoking blogs have sent me down numerous nug warrens. Also, her fanfiction is especially lush – and she focuses so well on the nuances of characters' interaction with so much layering and a ring of authenticity. Naturally, when she mentioned that she also writes original fiction, her fantasy novella Falada ended up being an insta-buy on my list. 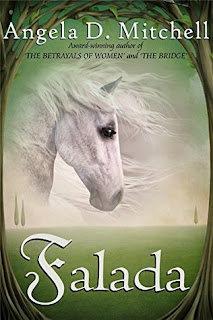 I'm going to go out on a limb and compare her writing style to Neil Gaiman's right off the bat. She has an understanding of story structure, especially in terms of taking the form of a fairytale and making it her own, then subverting it with all the touchstones we've come to know and love, from wicked witches, enchanted steeds and princesses.

Falada is the story of the princess Géanna, whose mother is the wicked witch. It's the tale we know all too well – a princess must marry a king and become queen. Only Géanna isn't your bog-standard, typical princess. And as much as she loves her mother, she chafes at her mother's manipulations. Yet Géanna is an obedient daughter, up until a point. It's when she starts to take matters into her own hands that her fate unravels, and she's faced with the task of trying to right the wrongs that have placed her where she is. Of course nothing runs smoothly, but I'm not going to spoil it for you.

Okay. I love Mitchell's writing. I will most likely go out and buy the next book she publishes without batting an eyelid. Was Falada perfect? It wasn't, but Mitchell's wordcraft is magic. I feel almost as if the novella wanted to be a novel rather than a novella, and that's my only real bone to pick. Things are left at a 'happy for now' by the end, but I feel that the outcome at the climax was a little bit rushed, too easily resolved almost. And I think this is something that might've been fixed with a brainstorming at the developmental stages of the writing.

This wasn't a dealbreaker, however, and if you've enjoyed Stardust, you'll most certainly enjoy Falada. Read it with my blessings. It's a lovely story, and one that I'll be thinking about for a while yet.
Posted by nerinedorman at 10:49 AM