Pirates of the Caribbean: The Curse of the Black Pearl as a template for characters' desires

Sometimes we read a story that doesn’t quite hit the mark. Many readers can’t always articulate why it is that a story isn’t as satisfying as it should be, but as an editor, I can tell you that important milestones exist within every story (and every genre) that if they’re not quite ‘there’ then it means that the story falls flat. 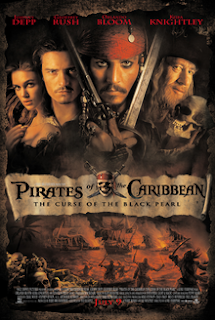 I’d like to talk about heroic qualities, and touch on both inner and outer journeys for characters using a film that I’ve loved ever since it came out: Pirates of the Caribbean: The Curse of the Black Pearl. Yes, it’s somewhat silly, and flawed, but what I do believe the writers did well was articulate the main characters’ desires. Each also was the hero of their own story, and each story arc slotted seamlessly in with the others. And most importantly, this film highlights the importance of clearly articulating characters’ desire.

Elizabeth Swann is the daughter of Governor Swann, who is in charge of Port Royal. Even though she’s gently bred, she nonetheless yearns for adventure and is a plucky young woman who thinks on her feet. We discover a girl who’s grown up on stories of pirates, and who secretly harbours a desire to experience adventure. Yet she plays the dutiful daughter because that is what society demands. Her initial call to adventure is when as a child she protects the young Will Turner, who is rescued from a shipwreck, and who wears a cursed pirate medallion. She is brave in the face of danger, in sharp contrast to the damsels we often see in film who are the prize and not the ones who claim the prize. Yet she’s not afraid to wield her femininity as a weapon. She is even willing to offer herself up as a prize to Commodore Norrington in order to save the man she loves. Elizabeth shows us a character who despite her apparent vulnerability in a traditionally male-dominated society, is unafraid to give as good as she gets, despite her limitations. Her conflict arises between doing what is expected of her vs following her heart, which is represented in the choice that she makes in whether she will choose a life of security with Norrington or follow her passion and break with tradition by choosing an uncertain life with Turner. A note here on Governor Swann, who bucks the trend of the traditional patriarchal figure who enforces societal norms. He allows his daughter the choice at the end and is concerned for her happiness.

Will Turner is on the standard hero’s quest to find his father, yet his journey to uncover the truth of his past is not smooth. His call to adventure comes when his father sends him a gold medallion, and at a young age he journeys to the Caribbean to find his father. Unknown to him, his father is a ringleader in a pack of pirates fighting over cursed Aztec gold, and he’s been drawn into the heart of this very curse. Employed as a blacksmith’s apprentice with a knack for not only creating fine swords but being a fine swordsman himself, it is clear that he is enamoured with Elizabeth, although she is far about his social station, and theirs would be a most unsuitable match. If it were not for Elizabeth’s kidnapping by the pirates, who mistake her as the scion with the blood who will end their curse, and the fact that Jack Sparrow recognises Will as Bill “Bootstrap” Turner’s son, it is possible that his story would have remained with him crafting swords in Port Royal. Except Sparrow drags him into the adventure, and Will makes startling realisations that horrify him: he is the son of the notorious pirate. And with this he spends most of the film at war with this truth about himself – that there is this wilder side to his nature. He comes fully into himself when he acknowledges his nature, and instead of being the meek blacksmith’s apprentice, he becomes unafraid to take risks and take control of his destiny. While he doesn’t quite gain the closure he desires with regards to his father’s fate, he nonetheless has a better understanding of his place in the world.

Captain Jack Sparrow is perhaps the unluckiest pirate alive, and his existence is filled with one daring escape after the other. He fulfils that delightful grey area of the inveterate trickster who encapsulates both heroic and villainous qualities. Within the story arc of the films it is often through his actions that obstacles are thrown in the path of both protagonist and antagonist, and yet despite his self-serving ways that often are counterproductive to both himself and his allies, he still sets events in motion that are for the good. His desires are clear: he wants to reclaim his ship, the Black Pearl, and he will do anything to attain that goal. The Black Pearl is his prize, his freedom – which is more valuable than gold. It’s these desires of Sparrow that help drive the plot of the film forward and create tension that supports the journeys of Elizabeth, Will and Barbossa.

Captain Barbossa is more than just a one-dimensional villain who rubs his hands in glee. His desire is clear: he wishes to end the curse that sees him endure a shadowy, undead existence, where he is unable to enjoy life’s epicurean pleasures. All he wants is to be able to eat, drink and … well … do the other thing. He is surrounded by opulence, good food, drink, none of which he can taste. He is cursed to sail the Black Pearl through all eternity until he finds that last piece of Aztec gold, which happens to be in Elizabeth’s possession. He needs that medallion and with it spill the blood of Turner. It was through his own greed that he inadvertently sealed his fate when he and his cronies sent Bootstrap to Davy Jones’s locker. Now he has a chance to reclaim his mortality, and his greatest prize, thanks to Will and Elizabeth’s actions. Of course, hijinks ensue, and we end up with a dizzying array of double- and triple crosses.

Where Disney gets this right is that each character is the hero of their own story. If you had to write a book purely from the point of view of any one of these characters, you’d get a perfectly decent story that will no doubt have you at the edge of your seat. Put them all together and balance the tension just right, and you have a beloved, enduring swashbuckling adventure.

The Pirates of the Caribbean franchise is not perfect, and if you ask me, they should have ended at the third movie, but I do believe that we as authors can learn from how these characters’ desires drive them into conflict with each other as each seeks a prize that is unique to them.

Posted by nerinedorman at 3:11 AM