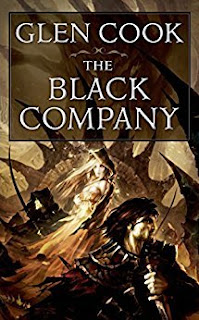 Cook's writing makes you work, and reads like a relatively shallow musing that doesn't dig deeper into motivations, but hurries along and leaves you in the dust if you don't try make connections. So I can see why he's not for everyone. I enjoyed the camaraderie between the characters, the things not spoken of, and that there was a gradually unfolding saga against which Croaker's small part played out. I also liked the idea that things weren't explained to me, so that I had to draw my own conclusions from this morally grey story. Our main character is unashamed by the fact that he takes his pay, does his job, and reserves his opinion for his own private moments. As for whether this makes him good or bad, it depends on which side of his bow you stand.
Posted by nerinedorman at 5:30 AM