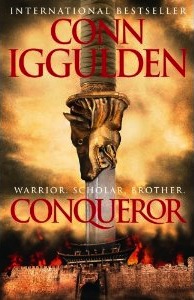 Long ago, nothing could have been more frightening than having a Mongol horde descend upon a town or city. But these warriors were so much more than just a marauding force on the landscapes of history. Not only did they rule a massive empire, they also assimilated many cultures and their actions still reverberate throughout history. Conqueror concludes Conn Iggulden’s series based on the life of Genghis Khan and his heirs.

The novel concerns itself mainly with the doings of the legendary Kublai Khan, who not only established himself as an emperor in the Far East, but also won a bloody civil war to declare himself supreme leader of his people. Kublai Khan is portrayed as a scholar-turned-warrior, who draws upon his somewhat academic upbringing to outsmart his rivals.

And what a ride it is. Having read the preceding Empire of Silver, I knew what to expect, but looked forward to Conqueror mainly to see how the story of the Khans turned out. For anyone who is interested in history, Iggulden certainly offers a masterful retelling and if, like me, you weren’t au fait with the details, the outcome will result in a nail-biting journey.

If military strategy, warfare and violence aren’t quite your thing, then this saga is probably not for you. The Mongols didn’t shrink from spilling blood – sometimes gratuitously so – and their acts of cruelty were tremendous.

Though Iggulden admits to taking liberties with actual history, he definitely succeeds in whetting my appetite in delving deeper into this period and I walk away with a far clearer idea of the Mongol people. Granted, pacing issues are a challenge when writing more or less historically accurate fiction, but Iggulden manages a far tighter result than in Empire of Silver.

At times I did feel that the author was manipulating readers’ opinions to prefer Kublai over his brothers (they all seem to possess some sort of fatal flaw), but that matters little in the bigger picture; this is still an enjoyable story which vividly brings history to life. Though Conqueror finishes before Kublai Khan’s rule reaches its peak, it’s a fitting and satisfying end to an action-packed series
Posted by nerinedorman at 12:01 PM