Pirates of the Caribbean: Dead Men Tell No Tales (2017)

Captain Jack Sparrow searches for the trident of Poseidon while being pursued by an undead sea captain and his crew. 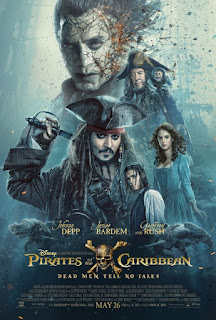 Auntie's not going to lie, she's had a bit of a thing for Captain Jack Sparrow (Johnny Depp) since the silly bugger first staggered onto the screen in 2003. Oh gods. Yes. The movie franchise is *that* old. I'm *that* old. Ah, well, never mind.

My first thoughts when I walked out of the cinema was that this fifth instalment in the series isn't awful. I mean, it could have been worse. I was entertained, yes, but the movie wasn't *sharp*. The humour was slapstick at best, and while loads of peeps in the cinema were laughing, I wasn't. It really wasn't that funny.

I mean, I was entertained, and the CGI was pretty. And there were some awesome things happening, but if you're looking for the same snap that you'd get with Guy Ritchie's King Arthur, you're going to be left hanging.

Plot wise, Dead Men Tell No Tales is a pretty standard hero's journey, evenly divided by the two main characters – Henry Turner (Brenton Thwaites) and Carina Smyth (Kaya Scodelario). Henry is the son of ... yussss, no surprises there. Ta-dum! Will and Elizabeth (Orlando Bloom and Keira Knightley). And he's after the Trident of Poseidon that will allegedly break all curses so that he can reunite his daddoo and mummoo. Carina is our orphan in the storm, the intellectual lass who's got her father's journal with the "map that no man can read" (get it, she's a chick not a dude, so she can read it, huh, huh) and she's on a mission to also find the Trident.

Captain Sparrow, as always, is the trickster figure who's an agent of chaos with the compass that leads to his heart's desire that he keeps ignoring to his own detriment. His denial of this call to adventure results in the release of his spooky arch-nemesis Captain Salazar (Javier Bardem) whom he cursed to undeath (as one does) who's now hell bent on Captain Sparrow's demise (revenge being, of course, one of the noblest causes). Of course to get to Sparrow, Salazar hunts down all the pirates that he can, thereby drawing our old friend Barbossa (Geoffrey Rush) into the equation, and what follows are the usual double-crossings and unbelievable coincidences one comes to expect with any of the PotC films (mainly because I don't think the writers could be arsed to actually develop a nuanced screenplay).

Look, the CGI effects are awesome, but they don't quite make up for the lack of substance for the underlying story. To be fair, if you're in the mood for mindless entertainment, slapstick humour and plenty of explosions and stunts, look no further. This instalment most certainly hangs together more cohesively than Pirates of the Caribbean: On Stranger Tides (which is not saying much, I know), but there were still moments where I felt that some of the transitions were jagged, and relied on the wow factor to gloss over what the narrative lacked.

Okay, I'm feeling slightly rotten about my ambivalent review, so I'll say it again, this is not a horrible film. It's fun. There are loads of gags, and it had people laughing. And Carina steals the show, honest to goodness, while Henry is just a bland little porridge boy. Hey, one day I'll be jumped up on too much coffee and sugar, and I may even watch all the Pirates of the Caribbean films back to back because I've always got a soft spot for my favourite pirate captain because I quite enjoy Depp slurring and staggering about, oblivious and yet somehow endearing. (Though I find now that he only ever seems to reprise Sparrow with most of his roles that he takes on these days.)

At time of writing, I've noticed that IMDB has an entry for PotC 6 with nothing cast in stone yet. I hope they lay the movie franchise go to rest, with the fifth movie. No. Really. If anything, maybe look at a spin-off TV series and hire some good writers to develop a solid script, but please don't try to flog this pony you've only just managed to scrape up off the ground. Dead Men Tell No Tales ties up the assorted narrative arcs nicely. Let it end here. Please.
Posted by nerinedorman at 2:24 PM