Prince of Fools by Mark Lawrence

I'm a horrible, horrible person because I've taken *months* to finish Prince of Fools (The Red Queen's War #1) by Mark Lawrence (Goodreads tells me I started during December last year and it's quite inexcusable, really, that I've tarried so long). But that's what Mark's writing is to me – something to savour. The Red Queen's War is the next trilogy to get into if you've discovered and loved The Broken Empire trilogy. 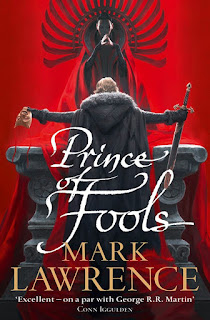 But let's talk about Jorg Ancrath first, our bad-boy, maverick prince from The Broken Empire. Here we were faced with a delightfully psychopathic adventurer who had absolutely no regard for his own personal safety or long-term survival. Jorg would heedlessly fling himself from one untenable situation to the next, offering astute commentary along the way that signals a lively mind and a somewhat absurd sense of humour.

The howling of readers by the time book three drew to a close, that Mark was *finished* with Jorg... Well, it was adorable. [She says with a smile, gives Mark a high five for stopping when the going is good.]

Sensibly, Mark went on to create an entirely different tone in The Red Queen's War with our new friend Jalan Kendeth, 10th in line to the Red Queen's throne and unashamedly a lying, gambling womaniser, whose healthy sense of cowardice has kept him alive all this time. While Jalan is no Jorg, he's certainly still a smart-mouthed chap, so his explanation of events as they unfurl is half the fun.

Jalan is a reluctant hero. Haring off to the frozen north to face a great evil is the last thing on his mind, but there are larger forces at play in this cracked world where magic is bleeding back in to cause untold chaos. Jalan, and his equally reluctant counterpart Snorri ver Snagason, find themselves bound together as pawns in a game where they don't have all the rules. True to Mark's writing, there is plenty of bloodshed, death, violence, wenching and all the things that soft-hearted, gentle readers may want to avoid.

Evidently I'm not a soft-hearted, gentle reader, so I quite happily followed our two lads from one misadventure to the next. Knowing what I do about Mark's writing, and how he puts his stories together, I'm suitably entertained and looking forward to the other two instalments in the trilogy.

I must add here that I particularly adore Snorri. Part of me feels as if *he* is the actual hero of the story; Jalan is merely the storyteller spinning a saga about a mythic warrior and father on a quest to save his family. On the outside, Snorri appears to be *just* a hulking brute, but slowly the layers are peeled back and you discover a character of great complexity and subtle intelligence. I like it when that happens.

In essence, Prince of Fools is a dudebro quest, so it's probably not going to appeal to those wanting a story that passes the Bechdel test. That being said, there were some cameo appearances that amused me greatly (you'll understand why when you read the book – it does take place during the same time that Jorg has his adventures). And seriously, this was just a huge load of fun to read, gore and all, especially with Jalan's witty observations along the way and some of the unexpected twists that had me shaking my head.
Posted by nerinedorman at 4:34 AM