Anyone who finishes Red Seas Under Red Skies by Scott Lynch (book #2 of his Gentleman Bastard series) will understand why I muttered, “Damn it, Locke” under my breath when I reached the end of the book. As always, Lynch weaves a convoluted tale, filled with double crossings after double crossings, until unwary readers may go quite squint trying to keep up with things. And trust me when I say there were times during this novel that I wondered whether a) things could get any worse and b) how the heck the two friends were going to get out of their predicament. Which kept me turning pages, so I guess that’s half the author’s work done right there. 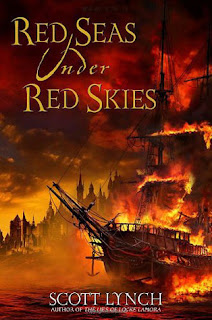 I will add that Lynch is one of the few fantasy authors who, in my mind, can get away with writing the kind of shallow third verging on omniscient point of view that he does. He sometimes skates dangerously close to withholding key information, but the break-neck speed of his telling at key moments means that even when he does neglect to share what Locke or Jean knows, he usually shows the rest of his hand soon enough after. So I forgive him. However I will state this much: I am difficult to please when it comes to omniscient third because so few authors get it right. Lynch gets around this by having short sub-sections per chapter, so that he cycles through characters’ points of view as and when it’s necessary, but every once in a while the author-narrator intrudes.

For fear of spoilers, I’m not going to go into a general overview of the novel, suffice to say that it starts out with Locke and Jean planning the heist to end all heists – a job that’s two years in the making as they execute their designs of the aptly named Sinspire gaming house.

The environment in which they find themselves is decadent to say the least, and I lapped up the descriptions of the people. Lynch’s world building is intricate and layered, and I’ll hazard to say that nearly every small detail is important – so take note. He does a lot of foreshadowing to get around the fact that he doesn’t immediately clue you in with the full details. You’ll know something is afoot, but not much more than that until he reveals.

Also, I went into this novel expecting one thing, and about halfway through Lynch pulled the rug from under my feet and the kind of story I thought I would be reading turned out to be something completely different. I won’t say what, but it was awesome, and fun, and he introduced me to some unforgettable characters.

Damn it, Lynch. There is The Thing that happens near the end. I won’t say what but I was gutted. Not quite to the degree that I am reading Robin Hobb, but pretty darned close. And that’s all I will say on the matter.

Getting into Red Seas Under Red Skies was not immediate, as it felt to me that there was quite a bit of setting up that happened before the story really got underway. Lynch’s style isn’t for everyone, nor is the subject matter – focus is very much on action rather than emotional layering, which he keeps close to his chest. But once I got going, I was invested, and that’s what counts. I really do love the dynamics between Locke and Jean, even if the novel tends to stagger around unexpectedly. The worst part is that I finished reading the novel while on holiday in an area where I had to walk 1km to just get cellphone signal, so at the time I couldn’t go google to see whether there’s another novel to follow up this one… Yeah, it was that sort of book. (And there are more in the series… so I’m happy)

Posted by nerinedorman at 12:07 PM