I'll start by saying that Lost Gods by Micah Yongo is an ambitious novel, and Micah most certainly bites off a lot of content for readers to chew on as this adventure kicks off. And this is most certainly a book one in a series, with some narrative threads left undone by the end and some fascinating characters who will most likely still go on to uncovering further mysteries. 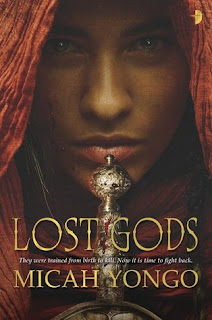 Firstly, the world building is something that's right up my alley – a wonderful departure from the standard Euro-centric fantasy – that takes on a decidedly African flavour to the setting that is well realised. So, that's a huge thumbs up from me. That being said, Micah has a bit of a tendency towards exposition that could possibly have been reined in a wee smidge. Not that it bothered me too much, because the story does move along at a cracking pace, but there are moments when I feel that the flow has a few hitches. Then again, I'm a bit of a history buff, and while all the names and places did get a bit overwhelming at times, I reckon I remained afloat.

And there were some lovely characters. While we primarily deal with Neythan, and his quest to find his peer Arianna and figure out what on earth went wrong with his first mission as a newly fledged assassin, we do have some of the story from secondary characters who also have important narrative arcs. Perhaps here is a little bit of my wish that we could have seen a little more of them? Then again, some of what they discover I suspect will be important for readers to know later. There were a few moments where I felt that point of view could have been a bit deeper, with a bit more digging in terms of understanding characters' motivations to keep the overarching plot on track, but on the whole the characters are distinct and I cared about what happened to them. So there is that.

There is a lot going on in the story – not only courtly intrigue, but also conspiracies to uncover within an order of assassins, and Neythan (and by default readers) won't have any clue what's really happening, as Neythan is kept off balance the entire time – which I quite enjoyed. I did feel at times that the divine prophecy aspect to the story felt a bit tacked on, and could have had a bit more development, but it added an intriguing dimension to the novel that I'm certain will be developed later on.

While at times I wasn't entirely certain of what the characters' actual goals were (this was a bit muddy, especially near the end), I did enjoy Lost Gods, primarily because it's a breath of fresh air in an incredibly detailed world. There's a lot of lore here, beneath the skin, and for lore junkies like me, that's pretty much irresistible. So a big thumbs up from me, and I'm going to keep an eye on Micah's career.
Posted by nerinedorman at 4:09 AM