Perilous and Fair: Women in the Works and Life of JRR Tolkien

I honestly have no idea who put me onto Perilous and Fair: Women in the Works and Life of JRR Tolkien (edited by Janet Brennan Croft and Leslie A Donovan) but it's proved to be one of my reading highlights for the year so far. If you're reading this review right now, thank you. 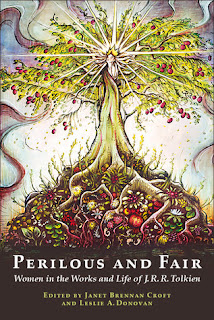 Those who know me well, will know that JRR Tolkien has always been my first love in fantasy, so to delve into this selection of essays that re-examines the role of women in the works was an absolute treat.

Everyone who's read The Hobbit or The Lord of the Rings will know that there aren't that many female characters central to the story. We have Arwen, Eowyn, the lady Galadriel... And unless you've read the Silmarillion, you most likely won't pull up that many more names for female characters in Middle-earth.

I believe the selection of essays in Perilous and Fair, however, redeems Tolkien to a large extent. While the three primary characters I've mentioned are not front and centre in terms of the narrative in the novels, they are, however, not without agency, and each is examined, along with others, such as Lúthien Tinúviel, in terms of their power, and especially how male and female power differ and complement each other in Tolkien's Middle-earth.

Through this collection of essays, I've also come to see Tolkien himself in a different light – as a man who though a product of his time and environment, was nonetheless quite progressive in terms of his attitudes towards women (and their education) when compared to peers such as CS Lewis.

A nice touch was also the acknowledgement of the transformative aspects of fanfiction, and its contribution to the fandom as a whole – and a re-envisioning of the world from the perspectives of a woman's experiences within the setting.
Posted by nerinedorman at 6:46 AM