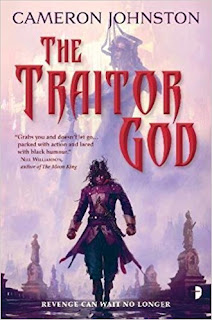 My question now is, when do we get the next instalment? I haven’t had this much fun with a fantasy novel in ages – this is most certainly one of my highlights for 2018. Johnston’s done a fantastic job, and if you enjoy the likes of Mark Lawrence, you’ll be right at home here.
Posted by nerinedorman at 4:56 AM