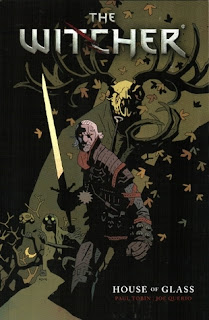 The art, on the other hand is lovely, loose and atmospheric, and made the comic book a great read that remains true to the essence of the Witcher universe. Also, you don't need to have read any of the books or played the games to know what's going on. It's a straight-up monster hunt, but with a slight twist at the end.
Posted by nerinedorman at 6:04 AM