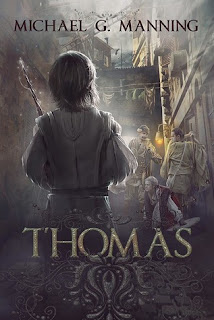 At its heart this is a sweet story; perhaps a little too sentimental for my tastes, so I suppose the fault lies with the reader, not the author. If you're interested in a messiah-style tale where an orphan-turned-cleric is charged with saving the world, then this one may blow your hair back. This was a not-quite-hitting-the-mark for me, unfortunately.
Posted by nerinedorman at 11:26 PM