I don't think I'd ordinarily pick up a book like Ranker's Charge by SP Steven, but this was a review copy that landed on my desk so I gave it a fair read. This novella is very much in the GrimDark territory of fantasy, with morally ambiguous characters who are often faced with making awful choices. We meet Sergeant Vila Kiprik who's at the end of his career in the army and looking forward to retiring to his little cabin. 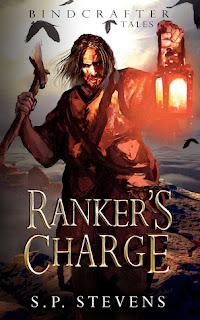 Except if the story were all about Kiprik's retirement, there wouldn't be much of a tale here. You see, Kiprik and his squad are responsible for clearing out the Unbound from an abandoned mine so that it can go in production again. It's bloody, dangerous work. Not only are the chaotically mutated Unbound a threat, but there are random patches of chaos that put in an appearance from time to time.

Fair warning, though, if you're not a huge fan of race-against-the-clock type disaster stories, then this one's probably not going to be for you. There's a load of tension in the telling, and if you think things can't go worse for the characters, think again.

SP Steven has a solid hand and a visceral, visual storytelling style, and while at the end of the day there's not much more beyond a main character fighting for his people to survive while coming to terms with his own demons, this is still an engaging tale. There are a few editing decisions that made me itch for my red pen, but no structural issues that made me twitch. Ranker's Charge is a prequel, and is meant as a teaser to draw you into this particular world, so if you're looking for a taste of something that might appeal without the huge investment of a trilogy, then give this a try.
Posted by nerinedorman at 10:51 AM