With the likes of Ursula K Le Guin and Robin Hobb blurbing this book, I should have taken notice of Uprooted by Naomi Novik a lot sooner. And with the greatest confidence I'll say that if you love the writing of both these authors, Uprooted will scratch the itch you didn't know that you had until you stepped past the pages and into the world of the Agnieszka. 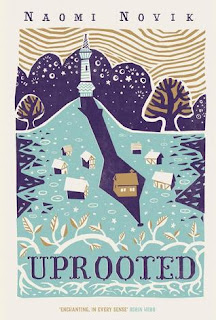 I really don't want to spoil anything for you except to say that Uprooted draws on all the classic Eastern European fairytales about ominous, dark woods, wizards in tall towers, magic and implacable enemies. The Wood threatens to engulf Agnieszka's village, and every decade their wizard, the Dragon, takes one young woman from their valley, to go serve in his tower. When the women return, they're forever changed.

Agnieszka is convinced her friend Kasia will be chosen... but obviously the story takes an unexpected turn. And I'm rather going to leave you to find out what happens next, because you'll be in for an adventure that will make it almost impossible to put this book down. Yes, I'm gushing, and this book SO deserves it.

I have fallen horribly and irrevocably in love with Novik's writing. She balances lush, evocative description with twisty, tricksy plotting. Wonderful observations of characters and a narrative that advances in ways that you cannot predict. The well from which she draws the waters for this novel lies deep within our shared storytelling troves, often with deft touches of familiarity. She fully engages your senses with her telling, and weaves a magical world of wonder that subverts and transcends expectations. Naomi is now on my insta-buy list, and she's a master of fantasy whose contribution to the genre will be considered on par with the likes of Hobb and Le Guin in years to come.
Posted by nerinedorman at 2:12 AM