All the Birds in the Sky by Charlie Jane Anders

I'm a little on the fence with All the Birds in the Sky by Charlie Jane Anders. It's a sweet little book that I feel doesn't easily rest in an exact genre. It's contemporary fantasy but feels more like magic realism with a slight surreal twist. There's also a fair amount of gentle mockery aimed at the whole East Coast hipster vibe that may also see this book not ageing well. 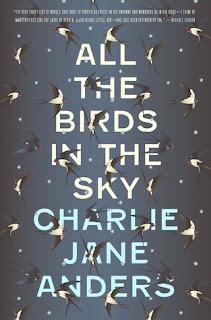 For the most, I couldn't really immerse in the story; it felt like there was a degree of separation between me and the characters, so it came across like the author narrator was at the wheel telling me the story rather than me having my preferred deep point of view. This in itself is not a major sin, and some authors do it really well, like Neil Gaiman, for instance, but it didn't really work for me here. I kept getting jerked out of the story, and I felt as if the tone, although charming, lacked sincerity.

The heart of this story centres around the age-old trope of magic vs. science, with two main characters who are polar opposites of each other, and you can see from a mile away that they're going to get romantically entangled no matter how much they have a prickly friendship as children. The novel follows them from awkward childhood to equally awkward adulthood, as they each become masters of their particular professions: Laurence is some sort of hotshot computer whizz while Patricia is a witch.

Anders' writing has a lot of whimsy, and some of the imagery is quite lovely, but in the end what salted it for me was the fact that I felt that distance from the meat and bones of the story. I also felt that there was a lot of build-up to the cataclysmic conclusion, which then sort of fizzled out near the end. I don't know if it was a case of the author being unsure of where they were headed or if they were rushed to finish. I also didn't feel strongly about either Patricia or Laurence – perhaps I liked Patricia more than I did Laurence, but the lack of immersion in either's point of view didn't help. All in all, I wasn't sold, even if I generally found this an enjoyable ride that I'll appreciate discussing with others who've also read the book.

Posted by nerinedorman at 8:01 AM