The Ingenious by Darius Hinks

Okay, so wow, hats off to Darius Hinks for world building. In The Ingenious, he's created a city that immediately grabbed my attention in a way that I won't forget in a hurry. Run by a group of enigmatic alchemists known as the Curious Men, the city of Athanor is not bound by location. Fuelled by alchemy, the city travels from world to world, where it siphons off resources until its rulers deem it time for them to move again. Consequently, the city is a true melting pot of cultures, a sprawling grotesquery of races and architectural styles steeped in squalor for those who don't have power or wealth. I loved this dark, baroque setting hard, and Hinks does a good job of gradually revealing the city's nature. 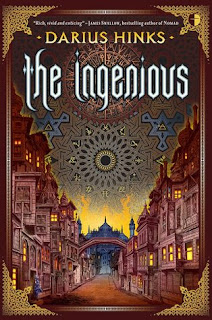 Enter Isten and her people, a small group of exiles who want to go home. Except they have no say in where Athanor will next settle, and they're hard pressed on all sides by gangs. We stagger into the story just as Isten reappears from a year of drunken indulgence. She's a rogue and a drug addict who has lost her way, and scoffs at her group's idealism. She's also not above using them to get what she wants, and she can't think beyond the next hit.

I get it. She's not a nice person. And she ends up getting mixed up in events that are way beyond her ken when she tangles with one of the Curious Men. Alchemy is involved, as well as dubious moral codes, and just when you think things can't get worse, they do. Isten has no morals, no scruples, until suddenly she does, except after her dark teatime, she's so deep in the dreck that she has to do some fancy footwork to get both herself and the people she's close to out.

This novel has most of the hallmarks I adore in fantasy, but it falls just ever so slightly short of the mark, and I believe it's developmental in the sense that we don't dig deep enough into Isten, in terms of her motivations and her sudden about-face near the end when she has to turn from rogue to hero. We have hints of a wonderful interplay between her and her polar opposite, but I feel as if the story wasn't quite driven far enough for this to feel satisfying. After a promising start, the novel flounders and eventually rushes to tie up loose ends in what feels like a slightly haphazard fashion that left me needing a stronger resolution. Kinda like me sitting back at the end, saying, "Is this it?" There was a particular thread involving the Exiles and a secondary character that could have been foregrounded more to help create a greater sense of upping the stakes and lending more of a sense of urgency.

If you're in the mood for a slice of GrimDark with serious Gothic flavouring, then yeah, this will be your jam. There were some great ideas here, and a simply fabulous setting that's begging a deeper plunge, but I would have loved to have seen more in terms of better realised structure and deeper character development.
Posted by nerinedorman at 11:51 AM