Pride and Prejudice by Jane Austen

I'll admit, the thing that made this novel easier for me to figure out was that I'd watched Pride and Prejudice (2005) starring Keira Knightley. I'd put off reading the actual Jane Austen novel for most of my life. This is not my usual fare, at all, but because a good friend of mine, Helen Moffett, is seeing the release of her P&P sequel Charlotte, I figured I'd better get reading so that I could have the background. 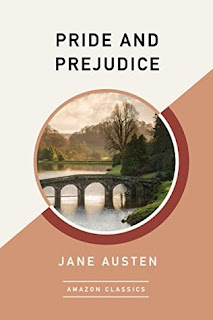 Historical fiction written during contemporary times is one thing, but actual fiction from more than hundred years ago is quite another. Austen writes for an audience that would take conventions in clothing and the environment for granted, focusing instead of dialogue and mannerisms. So we're left with a kind of shallow, limited third person that doesn't feed readers who're used to a deeper point of view. So it helps immensely for folks like me, who honestly don't have a clue, to have watched that film. It gave me useful context. Don't be ashamed to watch the film before reading the novel.

I believe it does the book a disservice to evaluate it using contemporary standards. Authors these days have a deep well of literary conventions to draw from, so applying those to Austen will rob the book of much of its character. For me, P&P exists as a time capsule, offering a glimpse into particular cultural and social mores prevalent within English society at the time. We step into a world where characters are trapped by their status within society, and while it can be argued that many of Austen's characters are shallow (um, hello, Mr Collins much), I feel that Austen is taking stabs at society. And it makes me also realise how much society has changed, and what we, as women, take for granted in terms of our liberties and empowerment in contemporary times.

While I didn't gain the same sort of enjoyment from Pride and Prejudice as I would from the usual titles I'll slide onto my Kindle, I nonetheless walked away from this novel feeling as if I'd gained a better understanding as to why Regency-era stories have carved themselves such a beloved niche among readers. It's easy to loathe some of the characters, and at a glance, people like Mrs Bennett seem facile and annoying, but if you dig a little deeper, the social commentary becomes crystal clear. Sure, Mrs Bennett's obsession with marrying off her daughters seems exhausting, but if you understand her very real fears that she would not be able to care for them if they never got married – for there were no prospects for a woman in those days to have a career – then it's possible to be more sympathetic towards her. Despite each character having perceived privileges, they themselves are trapped by their social standing. And don't get me started on Mr Collins, and especially his appalling commentary when one of Elizabeth's sisters elopes.

It took me some time to get used to Austen's style, and now that I'm done with the novel, I also realise it's a story that begs being reread at some point. The beauty of the telling lies in what the characters have to say to each other, and how they respond to circumstances, and I feel on the first read through there were many subtleties that I may have missed.
Posted by nerinedorman at 8:37 AM