Every once in a while I like to shake up my reading, and Mary, Queen of Scotch by Rob Rosen piqued my interest when it landed on my desk. After all, what's not to love about glamorous drag queens with a side order of private investigating... and a little more investigating of matters of a more private business beyond that... 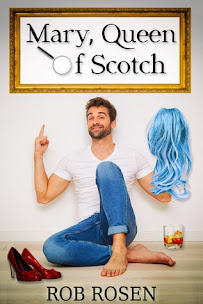 Barry is a private investigator, but he's not exactly flush with exciting work until a client hires him to find out if his husband is cheating on him. Except Barry ends up going undercover as a drag queen, which is not exactly flying under the radar, but it does place him exactly where he needs to be to dig up the dirty. With his mum helping him with his new look, he's ready to solve his case.

Only a simple investigation to find out whether a spouse is cheating turns into something much more complicated, which I won't share for fear of spoilers. Suffice to say Barry finds himself in the midst of an incredibly tangled knot I had no idea how he'd find his way out of.

And if untangling his investigation isn't enough, Barry finds his heartstrings thoroughly plucked by not only a past lover he'd thought behind him, but also a new beau who may or may not be unsuitable. Cue gallons of steamy tension. Filled with oodles of bitchy humour and far too much glitter, Mary, Queen of Scotch provided four solid drams of fun.

Posted by nerinedorman at 8:13 AM