The Black Tides of Heaven by by JY Yang

JY Yang's writing has been on my radar awhile now, so I looked forward to getting into their writing, especially since this is fantasy that is most certainly not the stock-standard euro-centric fare I'm used to.  Mokoya and Akeha are identical twins, but in their world, children maintain a neutral gender until they decide whether they wish to become male or female. This was a nice touch, which I enjoyed as a breath of fresh air. 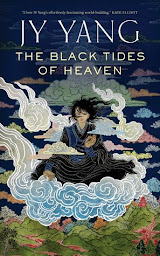 Thus the twins' paths diverge as they gain their majority, with Mokoya gaining fame as a prophet, while her brother Akeha drifts into the rebellion between the magic-wielding tensors, who seek to maintain their power as an elite, with the Machinists who, aptly named, work with the mechanical, to bring power into the hands of all citizens of the Tensorate.

Yang's writing is nuanced and rich with description, and the world they evoke is incredibly tactile. I do feel that this is a novel masquerading as a novella, and while I enjoyed the story immensely, I almost felt it moved too fast. This is a world that is ripe for development, and I would have loved to have seen more conflict building up to the ending. Despite this brevity, the story still flows beautifully, providing just enough meat to the bone for me to invest in the telling and the characters.

The book works on many levels, examining the relationship between siblings, as well as siblings and a parent, within a highly complex society with a distinct culture where conflict is brewing between different classes. My only wish is that Yang had stretched out the telling more to take advantage of all the wonderful raw material available.

Posted by nerinedorman at 12:02 PM