Crime novels aren't my usual fare, but I read them when I like the author, and I'm rather fond of NR Brodie. Three Bodies follows on from her occult-noir novel Knucklebone, where we meet Reshma Patel and Ian Jack, who initially work together to solve crimes related to an animal poaching ring. Both realise that there is more to reality than meets the eye, though. Then again, if you tangle with sangomas, expect things to get a bit strange. 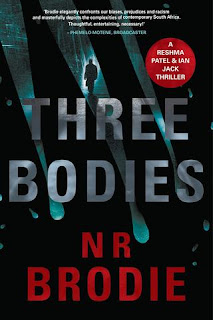 Three Bodies is no different. At the outset, when drowned women start showing up, Ian is roped in to investigate, despite no longer having an interest in police work. Reshma finds herself drawn into an elite crime-fighting unit – with a bunch of tough cops who work against the cash-in-transit heists that are so prevalent in South Africa. It's scary, high-stakes stuff. And here Brodie has done meticulous research to offer an authentic ring to the police work.

But then a sinister link between the drowned women, dark muti, the cash heists, and old-guard apartheid officials who were never brought to book, is formed, and Reshma and Ian find themselves racing to solve a case of a missing woman before she, too, ends up drowned.

Overall, I found the gradually unfolding pace a little on the slow side, but things picked up a lot quicker near the end. Reshma is one hell of a tough woman, and it shows, and Ian's quiet empathy with others also shows that he possesses qualities that complement Reshma's. They team up with an unlikely bunch for the finale, and then ... well. I'll leave it up to you to find out what happens. As always, the whiff of the supernatural is just a taste. Perhaps too light a touch that may have required smidge more foreshadowing, but I loved it anyway. I'm reminded of an old HP Lovecraft quote:

The most merciful thing in the world, I think, is the inability of the human mind to correlate all its contents.

Which will make sense for those who've read the book and understand how Ian must struggle with what he sees unfold at the satisfyingly cataclysmic ending. Gritty, dark, and somewhat weird, this novel is definitely an enjoyable read, and it's great seeing fantasy elements creep across genres.

Posted by nerinedorman at 4:12 AM