I will admit that I'm not as well versed in the history of ancient Rome as I am in that of ancient Egypt, but considering that there is overlap between these two civilisations, it most certainly helps to get to know ancient Rome a bit better. Ancient Rome by Thomas R Martin is narrated by John Lescault, and gives listeners a great introduction into Roman history.
Perhaps what I find most fascinating is seeing how ancient Rome continues to influence Western civilisation even now, hundreds of years later, and it's also possible to gain an understanding of how Rome managed to dominate much of Western Europe for so many centuries. 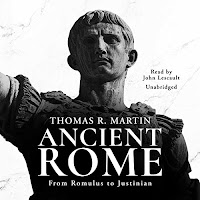 While a deep dive is beyond the scope of the work, Martin does examine the political, religious, and military structures that created this important chapter of Western European history. What I found of particular interest was seeing especially how religion was a shaped as a way to control society, and how the emphasis shifted from the original pagan gods to the Christian religion so intrinsically linked to authoritarianism. What's particularly fascinating is also seeing how Roman military discipline most certainly contributed to the conquering of so much territory. Of course, holding onto that territory afterwards is where the difficulties came in – and it's no surprise that the empire split in its latter years.
Overall the quality of the audiobook was not uniform – not so much to detract from my enjoyment, but there were clear sections where the sound shifted ever so slightly, possibly where parts were dropped in. That being said, I'd still recommend this to anyone who's yet to explore Roman history – this has certainly offered me the bigger picture I need in order to delve into other, more focused works.
Posted by nerinedorman at 5:29 AM