A General History of the Pyrates by Daniel Defoe

I can't quite pinpoint what I find so fascinating about the history of piracy, but listening to the audiobook of A General History of the Pyrates by Daniel Defoe was certainly easier than slogging through the actual reading – so kudos to the narrator, John Lee, for the overall slick execution of the production. That being said, this book is very much a product of its time, and reflects the casual racism and cultural jingoism so inherent to the era and in the author's general outlook. But if you're prepared to look past this, there's a treasure trove of details about the history of piracy during the late 1700s, much of it allegedly drawn from interviews with primary sources. 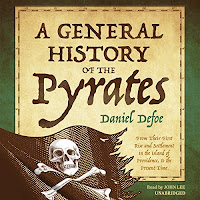 If you're an author, like me, on the hunt for story seeds, there are certainly plenty to be found among the tales of awful people doing awful things. Which in my mind is pretty much a summary of what this book is about. Forget the golden glow of historical romances – the lives of pirates and indeed any sailors press-ganged into service during the 18th century – were often brutal, bloody, and short. If disease didn't carry you away, a storm might. Or a violent encounter with pirates or an enemy fleet. You'll meet cunning men and women among these pages, as well as wicked, greedy, and violent ones. The fact that the penalty for piracy was death did not deter those who sought opportunity on the high seas – no matter the cost of this dearly bought freedom.
I really don't have much more to say other than the fact that my continued research has offered me a clearer idea of the cultural mores of the era, the challenges faced in sea travel, and how far we've come as a global community compared to what things were like during the 1700s. While much of this book can be quite dry, a patient reader can glean fascinating insights about a time so vastly different from our own.
Posted by nerinedorman at 12:46 PM