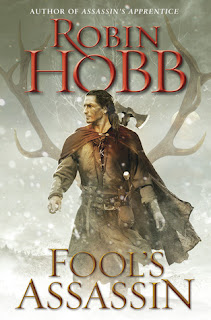 Generally when authors return to their settings after many years' absence (either in writing or in years for the characters themselves) it doesn't often bode well for the quality of the story. I'm happy to say this is not the case with this third trilogy in the saga of FitzChivalry Farseer – The Fitz and the Fool. A big problem authors face is that of what new and (often) shocking revelations to offer, and we end up with a huge, whooping mess of "Too Much Awesome" [yes, I'm looking at you, Anne Rice, and your vampires]

That being said, I would most emphatically *not* recommend Fool's Assassin to those who've not read the preceding two trilogies. You'll be in the dark as to so much of the nuance and the backstories. So, if you've not read these other books, you probably shouldn't read the rest of the review. If you love nuanced, textured fantasy, just go read those books then say thank you. You won't get those hours of your life back but you'll be ever the richer for the experience.

Seriously, don't read any further if you don't want spoilers.

My feelings about the later Fitz books are complex. There's a part of me that understands that I'll never be able to recapture that same sense of wonder that I had exploring the world through a younger Fitz's eyes as in the first three books. Nor his more measured, somewhat disillusioned self in the catastrophic occurrences that transpire during the second trilogy. And oh, the heartbreak. The feels are...intense.

Nope, the Fitz we encounter in The Fitz and the Fool is an older man who's now coming to grips with the complex role of being a father figure to his extended family. An existence that should be idyllic is tempered with a growing series of annoyances (this is Hobb at her finest, foreshadowing disasters yet to come which Fitz, true to his style, chooses to ignore to his detriment) that eventually all tie up.

Okay. Most of this book is exposition. I'm not afraid to say it. In a sense, this is Hobb taking a huge breath and reframing her world, and two other central themes are change and loss. He has always hoped (at least in the preceding books) to one day have this life, but sadly for him his past has an uncanny way to grasp hold of his present.

Perhaps the most obvious is the fact that outwardly he has not aged, while Molly, the love of his life, is growing older. (This is due to a healing spell that exceeded far beyond expectations in an earlier instalment). Fitz is a man who exists outside of time. He has lost so much – Nighteyes (though our favourite wolf is very much present in spirit) and, of course, The Fool, who in my eyes is Fitz's other great love). Fitz grapples daily with the fact that his world has changed while he himself has grown more insular perhaps, set in his ways. And he excels at self-isolation, as we have already discovered.

This novel doesn't have a huge, earth-shaking plot, but it is certainly gripping in the sense that it sets up events that are important in the future even if the pace crawls along (and I certainly say that you read this novel to have a slice of Fitz's life and to understand what motivates him in what follows). And there is The Thing that happens. It is an awesome Thing. Canny readers will facepalm that Fitz is so blitheringly unaware of The Thing as it comes to fruition, but there's that little bit of wonder that you will feel when you see it unfold, and oh, Molly, she is a joy. Just to have one book devoted to the love between Fitz and Molly is a reward in itself. Fitz might not set out to save the world (just yet) but this bittersweet novel will introduce you to the players who'll be important in what's to come. I missed The Fool's presence terribly with this book #1 but a little anticipation never did anyone any harm.
Posted by nerinedorman at 6:06 AM