Fool's Quest (The Fitz and the Fool #2) by Robin Hobb

BIG DISCLAIMER: HERE BE SPOILERS. YOU HAVE BEEN WARNED.

Also, if you haven't read the preceding books in the trilogies, none of this might make much sense to you. 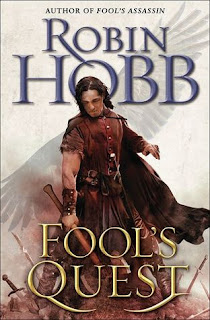 I really didn't want to reach the point where I hit the end of what's currently available with Robin Hobb's Fitz and the Fool trilogy, but here we have it, book two. Fool's Quest breaks from all the preceding books in that Hobb gives us a new viewpoint character: that of Bee, Fitz's second (and last) daughter with Molly.

So, if you're resistant to the idea of the novel swapping between the two, be prepared for the shifts in voice. While Fitz is reflective, older and may have lost some of his edge (he is an older man in his fifties, though his body is still under the thrall of that misfiring healing spell), we discover the world anew through Bee, who doesn't have all the threads of the past history at her disposal.

In a way, this is a way for Hobb to inject new life, new uncertainty into the setting. There is only so much we can show from Fitz's point of view and the story needs the freshness of a young, inquiring mind.

Bee is also not an ordinary child, as we discover, and her heritage is firmly intertwined with the Fitz/Fool/Nighteyes triad, though I shall refrain from elaborating too much. Suffice to say that Fitz and the Fool share a relationship that transcends the physical. A carving that Bee examines illustrates this relationship beautifully, and Nighteyes remains present, though not in a tangible form (but also in a way that brought a hard lump to my throat).

Fitz as always exists outside of time. The world outside Withywoods, his estate, has moved on. Power has shifted. Kettricken is no longer the primary power; her sons are coming into their own. Nettle has taken on a prominent role at court and my heart bleeds for the often prickly, awkward relationship she has with her father. Fitz, as always, makes poor decisions, for which he and others later pay the price. He is faced with great sadness, with loss, with change that he himself doesn't quite feel and in that he is quite a tragic character.

There is that Other Thing that is foreshadowed quite heavily in book 1 of this trilogy that plays out to its conclusion (inevitable for those of us who're accustomed to Hobb's clue-laying) that ripped my heart out. Yet in a way this was necessary, as this novel is very much a coming of age story, not only for Bee but also for our Fitz, who with the reappearance of the Fool, is once again cast in his role as Catalyst.

Hobb is not in a hurry with her storytelling. As noted by Mark Lawrence, in his review, "There are very few authors who can get me to tolerate considerable detail spent on clothing, gifts, feasting and just plain organizing stuff. George RR Martin somehow manages it, and so does Robin Hobb. I guess that if you write well enough then anything goes."

To that I can't add anything, except to say that to immerse myself in Hobb's writing is to have a fully tactile experience in another world, down to every last detail, and there are times in my life when this sort of measured, highly textured writing that slowly unfurls is *exactly* what I need to make me feel better about having to face my own grind. And hells, book three can't come fast enough. The waiting is pure torture.
Posted by nerinedorman at 2:54 PM