Before she was Wonder Woman she was Diana, princess of the Amazons, trained warrior. When a pilot crashes and tells of conflict in the outside world, she leaves home to fight a war to end all wars, discovering her full powers and true destiny. 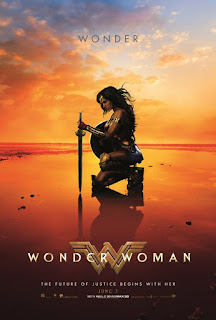 I will admit fully that I was horribly afraid that Wonder Woman would be a wee bit overhyped. I mean the cess pit that is media already gave me severe misgivings about whether I wanted to see the film. No, I don't care that she shaves her armpits nor that her thighs jiggle. I mean, FFS, if tooting some sort of identity politics horn is the only reason why you're going to give this film love then well, fuck that.

This is a good film, though. Thankfully. From a pacing perspective and considering character development, this is possibly one of the best blockbuster new cinema I've seen recently (except perhaps for The Arrival).

While I wasn't absolutely floored when I left the cinema, (I've a little issue with super hero films in general and the Curse of Too Much Awesome that seems to bedevil them), I had to recant a little once the husband creature and I had an opportunity to trade our thoughts.

This *could* have been that awful movie that was just put out there to tick feminist boxes. It isn't that movie. Instead we have a very refreshing female hero whose naïveté when faced with a world radically different from her own results in her having reevaluate her stance on the way forward. She goes into battle, amped to take on the Big Bad she's been prepared her entire life to fight, only to discover that the evil she's supposed to root out is a little more complex than that. Now, that's some writing that I like.

The support cast (a Scotsman, a Middle Eastern guy, a Native American ... stop me if you've heard this one) were a little thin on the ground for plausibility, but from a storytelling perspective they served the purpose of reminding Diana of shared humanity is worth fighting for, blah-di-blah ... that sort of thing. That being said, I kinda wanted them to have more than a support cast role and get to know the characters better than just being cardboard cut-outs with a little backstory. But then I'm equally cognisant that you can only do so much in a film, and I've been spoilt horribly by TV series.

Gal Gadot as Diana, however, is as the title of this film suggests, just wonderful, bringing to the screen the perfect balance of vulnerability and strength. Chris Pine as Steve Trevor is your typical bland blond boy who makes me think of a generic Matt Damon type. He was thoroughly unremarkable. Frankly, I found the brief interactions Diana had with Sameer (Saïd Taghmaoui) to be far more refreshing, and I needed to see more of this. But ja, time. There's only so much you can do without bloating a movie.

Out of all the superhero films I've seen (and I must warn you, I can't tell my DC from my Marvel on the best of days except to say that I fucking HATE all Superman movies) Wonder Woman is most certainly one of the best written and executed where I felt that they didn't just gloss over poor screenplay with piles of CGI. And fuck it, I'm a woman. I dig seeing ladies kicking ass. If I was a little girl... ag, who'm I kidding, I'm still a little girl at heart, it was frigging awesome to have Amazons fuck shit up. It's nice to have films that break from the same tired old stories. And this is about as much whooooo girl power you'll get out of me tonight. Now go watch the film, eat some popcorn and have a good time. Wonder Woman won't disappoint.
Posted by nerinedorman at 2:44 PM