I knew there would be ugly tears at the end of Assassin's Fate. Robin Hobb excels at causing me to break down in ugly tears. There are very few authors who can punch me in the feels the way that she does. It's going to be difficult to write this review without spoilers, but I'm going to give it a stab though at time of writing I'm still feeling quite raw. 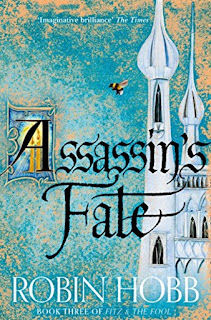 Anyone who's been in for the long haul with Robin Hobb will know that the FitzChivalry Farseer books (three trilogies) are part of her larger universe that includes the Liveship books and her related dragon books. It's taken me years, but I've finally caught up with Fitz, the Fool and Nighteyes, whose intertwined fates are complex and often take remarkable turns.

Objectively, this is not the strongest book of the series; at heart it is an extended epilogue. And I understand. Ending a saga with such a perennially popular character like Fitz is *difficult*. There is always the temptation to leave open "happy for now" threads but anyone who knows Hobb's writing will be well aware of the fact that she foreshadows *everything*. And while there are a few red herrings in Assassin's Fate, I was not surprised by the decision she made for the conclusion. It was *right*. I could see it coming a mile off yet I cried so much I had to give my glasses a good wipe afterwards and go wash my face.

I'll say this much: Not many authors can make a novel that is basically an extended sea voyage and rescue exciting, but Robin Hobb succeeds, and it's because of her attention to detail, the examination of the lives of others and their interactions and the smaller conflicts within the greater picture. The story is in its subtleties, and Assassin's Fate is the novel that ties everything together for all the stories that have come before. If Hobb wishes to leave this setting here, that would also be fine and right for me. In fact, it would be a perfect place in all its bittersweetness.

The story itself has a dual nature, part laying to rest of ghosts, part coming of age. Fitz is a man outside of time, who lives with his regrets. And he is tired, and this shows in his interactions with others. Bee represents a fresh current, heir to the incredible stories that have happened before her time, and burdened with being the one who is at the heart of the drama that takes place in the present. This is, as can be understood, a heavy burden to bear yet her trials also serve as a crucible.

I'm not going to go into any further detail, because it's difficult to discuss deeper without spoiling the story. If you've yet to read any of Robin Hobb's books, start with Assassin's Apprentice, book one of the Farseer Trilogy. Then read the Liveship Traders and the Rainwild Chronicles. The Tawny Man trilogy slots in somewhere there too, then finish with the Fitz and the Fool trilogy. You will meet an unforgettable cast of characters, and since I've now read many of the early Fitz books for the second time, I can state with authority as a long-time fan of SFF, that Robin Hobb's stories deserve their place among the classics in the genre, right up there with luminaries like George RR Martin, Mark Lawrence and others who write the kind of fantasy that doesn't shy away from treading on difficult topics with nuance.
Posted by nerinedorman at 1:13 AM