Western Empires, Christianity and the Inequalities between the West and the Rest by Sampie Terreblanche

Western Empires, Christianity and the Inequalities between the West and the Rest by Sampie Terreblanche is ... well, it's not an easy read. In fact, it's pretty much as hefty and complex as the title suggests. Yet it was one of those books that I felt compelled to dig into because I felt I needed to gain a better understanding of how everything all fits together, especially since I live in a country that has been distorted by the effects of colonialism. 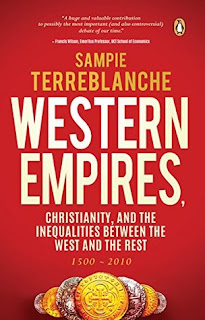 The West has dominated global politics and economics for centuries, and as Terreblanche illustrates, the reasons for this is complex, and most certainly inextricably tangled with a dominant religion, trade and warmongering. For centuries we've swallowed the narrative that a Western culture is somehow superior to those of the the "Rest" as Terreblanche terms the nations that were colonised by the so-called "track-laying powers" of Spain, Holland, Britain and later the USA.

However in order to understand why things transpired as they did, he digs deep, into the history of the East and West, and how different economic models had come into being and what their strengths and weaknesses were, and the world events that happened that would give the West the eventual advantage (hint: it has to do with the plunder of raw materials from Africa and the Americas that led to the eventual destruction of the East's economy thanks to the importation of cheap European fabrics, according to Terreblanche). Yes, the industrial revolution was a key event in world history.

Granted, my own understanding of the complexities of world economics are sketchy at best, and I struggled to get to grips with a lot of the terminology used, but I soldiered on.

According to Terreblanche, Christianity served as a justification for the world powers' military endeavours, and how at different eras, different powers arose (see my earlier comment about the track-laying nations). He points out that globalisation is a part of empire building, and looks at how maritime and military power, as well as the effects of industrialisation, help reinforce the sustainability of the assorted Western imperial powers.

We look at how the West has become what it is due to its plurality, and also the highly competitive behaviour born out of this. The West is grounded in a society that thrives on warfare, and is founded upon it.

Those who have monopoly will use it to oppress – resulting in slaughter, death and dislocation. Terreblanche examines the rise of the nation-state out of city-states and how a nation wielding power does so out of the notion that it does so morally. We see also the hybridisation of culture within a colonial society, and how indigenous populations are often complicit in their exploitation.

Something that I found fascinating was the connections between the four sources of imperial power: political, military, economic and ideological. Gunpowder, printing and the compass were important innovations but Terreblanche also states that private enterprise played a vital role in empire building. Consider also the authoritarian nature of the track-laying nations who built their empires. Modernisation, capitalism and war-making integral to the West. Warfare and imperialism go hand in hand.

Terreblanche looks at how Western empires conquered, subjugated and exploited what he terms the "Restern" world and how asymmetrical power relations lead to unequal growth via mercantilism, industrialisation then post-colonialism. Increased productivity required coercively acquired raw materials and resulted in destruction of local industries. So yes, the slave trade was a very big part of this, and the fact that the industrialised countries scrambled to divvy up the "New World" for their insatiable economy.

Terreblanche exhaustively details a recent world history along these lines, eventually looking at the aftereffects – how many African countries were unprepared for independence. Ruling indigenous elites often used their positions to enrich themselves through the state and the process of decolonisation is, therefore, as destructive as the process of colonisation with poor bureaucracy leading often to armed conflict.

Okay, that's pretty much a *brief* look based on some of the notes I took while reading. As a writer of speculative fiction, this book was incredibly useful to me. It also made me hate the human race just that little bit more too, but it was perhaps one of the most important reads for 2016. Granted, yes, Terreblanche's stance is quite Marxist, but I find I most certainly do agree with him that rampant, unrestrained capitalism is bad for us and the planet overall. And yes, anyone defending colonialism is going to get a serious side-eye from me. However, I will say this much: Colonialism is what it is. We live in a society that is forever altered by its effects, and it's what we do with this knowledge that is important.

This is a difficult read, but perhaps also one that is vitally important, and I wish more people would take an interest in trying to figure out the somewhat daunting bigger picture that Terreblanche has fearlessly painted. I don't think I can fully do this book justice, but I'm still in awe of its depth and breadth.
Posted by nerinedorman at 1:59 PM