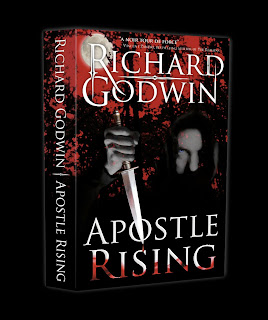 Today I welcome Richard Godwin to my world, author of Apostle Rising, who's graciously dropped by for a chat. Welcome, Richard.
* * * *
The idea for Apostle Rising came to me from a combination of considering the fallibility of forensic psychology and the idea of a case that has such an impact on a police officer’s life that it alters him.
My novel is about the re-enactment of some killings twenty eight years after DCI Frank Castle failed to solve the case known as The Woodland Killings. The failure to catch the serial killer almost broke him and the press savaged him.
Now twenty eight years later he is faced with a copycat killer who is crucifying politicians and leaving coded messages at the crime scene.
I was interested to explore how effective forensic psychology is at getting inside the head of an extreme psychopath and also to explore what exposure to horrific crimes does to a seasoned detective.
One of the key characters in Apostle Rising is Tom Spinner, an offender profiler brought in to help solve the case. He is brilliant and makes good headway but finds it hard to get a reading on the killer who keeps changing direction.
It is as if the killer has inside information.
One of the things I explore and dramatise in the novel is the effect that coming into contact with extreme evil has on police detectives.
The psychopathic killer crosses over into their lives.
Castle’s partner DI Jacki Stone is harrowed by what she sees at the crime scenes and her marriage suffers as a result.
The killer is playing games with the police.
The man Castle thought was responsible for the Woodland Killings, Karl Black, is now running a Christian cult and also begins to play with the police.
Meanwhile the mutilated bodies of prostitutes start to turn up in Richmond Park and Castle and Stone realise they are looking for two killers.
The action takes place in London and in a swathe of green belt land on the outskirts.
Although it is set in the UK Apostle Rising is easily accessible to any audience. Everything a crime reader expects from a crime novel is here. It is cop procedural and structured in a readable way with short sections that allow the reader to dip in and out of it.
I researched forensics and crime scene investigations for Apostle Rising. I also researched offender profiling, and there are sections of psychological analysis in the novel which are highly popular. I researched history, since there are references to Tudor history in the novel. I also researched medieval cults.
I wrote Apostle Rising for anyone who likes a good crime novel and a good guessing game. My style has been called Gothic by reviewers and I also write horror, so Apostle Rising is a crime novel that crosses over into horror in parts.
Stephen King is a major influence and a recent review has compared my novel to his writing.
Another influence is James Lee Burke.
I think the style in which I wrote Apostle Rising is one of its key strengths as is the characterisation.
Castle and Stone are unforgettable characters who will stay in your mind afterwards.
There is also a unique twist which I will guarantee you will not see coming.
Apostle Rising has already received some good reviews as well as coverage on CNN
http://ireport.cnn.com/docs/DOC-567449?ref=feeds%2Flatest
You can hear the interview I did for The Authors Show here
http://www.richardgodwin.net/
and find a full list of all reviews so far on my Media Page.
Bookgasm magazine says
‘it does an amazing job of sucking in the reader right away and never letting up. For a debut crime novel, it makes a great introduction to Godwin’s style and talent for prose. Be on the lookout for hopefully many more.’
Bookgeeks Magazine says:
‘Apostle Rising is a fine contribution to the genre. Rare for a crime novel, it has a lyrical, almost poetic style, beautifully written and well constructed. On the strength of this offering, Godwin is a welcome addition to the world of the full-length novel.’
Apostle Rising is receiving extremely positive feedback.
I hope anyone who buys it enjoys it.
* * * *
Richard Godwin is a crime and horror writer as well as a produced playwright. He was born in London and obtained a BA and MA in English and American Literature from King’s College London. He has travelled extensively and lectured, and worked in property. Many of his stories have appeared in magazines. His works in print include ‘Chemical’, published in the Anthology Back in 5 Minutes (Little Episodes Publishing 2010), ‘Doll’, published in Howl: Tales of the Feral And Infernal (Lame Goat Press 2010), 'Face off' in CrimeFactory Issue #5 (CreateSpace 2010), 'Pike N Flytrap' in Needle Magazine (Lulu 2010) and 'Mother' in Tainted Tea (Lulu 2011). His Chin Wags At the Slaughterhouse are interviews he has conducted with writers and can be found at his blog on his website where you can also find a full list of his works and a video ad for his new book. He divides his time between London and the US.
You can read more about Apostle Rising and see his full list of publications at his website here
http://richardgodwin.net
Posted by nerinedorman at 10:32 AM