Vampires suck…in all the right places 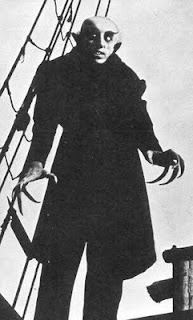 Despite annoyingly fertile sparkly vampires, I still love these creatures of the night. While Meyer’s creations are a bit tame for my liking—I prefer my critters with fangs and a knack for wolfing down tender young things—there are some fictional greats that stick with me.
The first vampire novel I read, ironically, wasn’t Interview with the Vampire or Dracula, for that matter. I was fourteen and a mate at school totally spazzed over Poppy Z Brite’s Lost Souls, which she lent to me. Please bear in mind that up until that point, I had subsisted on a steady diet of Anne McCaffrey’s Dragonriders of Pern. The world of Nothing was an, erm…considerable departure from the norm.
But something struck a chord. Less than a year later I stopped listening to Queen in favour of Nine Inch Nails’ The Downward Spiral, started wearing black…and convinced my mother to buy me my first pair of Doc Martens.
So, here’s my favourite fictional vampires in a rough sort of chronological order, who push my buttons.
Baby Jenks appears briefly as a very messed-up young vampire in Anne Rice’s Queen of the Damned. Out of all the characters in Rice’s stories, she’s the one I felt for the most. No. I’ll be the first to admit it. I don’t dig Claudia. She’s tragic, but not as tragic as Baby Jenks. Sure, she never asked for any of the bad shit to happen, but it did. And Baby Jenks had no mercy shown to her. I always felt that here was the beginnings of a decent character who could have grown into someone worthwhile reading about. Yet Anne Rice has never been in touch with youth culture in her novels, as much as her prose is pretty. Louis whines too much and Lestat has an ego the size of a small planet.
I reread Poppy Z Brite’s Lost Souls every five or so years. I love the way she describes settings. The prose is lyrical and visceral, though the plots sometimes don’t deliver to their full potential. But I spaz out over her writing. No really. If I could write only a tenth of the beautiful words Brite puts out, I’ll die happy. Out of all the vampires in Lost Souls, I have a soft spot for Christian, the tall, gloomy New Orleans barman. He’s a killer, yes, but he shows a softer side when he looks after Nothing’s mother during her pregnancy. I love characters who show this kind of dichotomy in their natures, the merciless tempered with consideration. Christian is the epitome of goth, sad as that may be, but I love him for it. He too longs for a beautiful death.
I must be the only urban fantasy author who has never watched a full season of Buffy the Vampire Slayer or True Blood. I haven’t even been able to gel with Charlaine Harris’ writing. I tried. It didn’t happen. She’s not a bad author. She’s just not for me. Twilight, I must admit, I gobbled up all four books in a week. They’re like candy floss for the brains, leaving great big holes in the grey matter. Don’t even get me started on Laurell K Hamilton or Christine Feehan. Show me one of those and the book has the same effect on me as garlic and crosses on traditional vampires. I’ve watched Blood Ties, a series based on the Tanya Huff books, and felt mild palpitations whenever Kyle Schmid stepped onscreen as the rather nommy Henry Fitzroy.
So that’s me and contemporary vampires. But I’d like to mention, at least, two fresh literary vampires who are blowing my hair back, by two authors you need to look out for.
When Sonya Clark submitted Mojo Queen to me, I fell so deeply and irrevocably in love with Roxanne Mathis and her vampire sidekick, Daniel Rambin, I wanted to recommend the novel for contract before I’d even finished reading the first chapter. Daniel is a real Southern gentleman who lives in one of those old antebellum mansions I have wet dreams about. He loves music, especially country, and sings really badly—which embarrasses Roxie no end. Most of the time he defers to Roxie, and it is very clear that he cares deeply for his distant relative, but we are left in no doubt that he is dangerous. It is like being friends with a very large and often hungry lion. Little quirks Daniel displays, like being a total thwarted foodie and blogger, round him off. He’s a delight: both civil yet feral. I love Daniel’s contrasting issues and the way he becomes overprotective over the willful Roxie.
What’s not to love about Xan Marcelles? He’s 6’5”, is part Native American, has long black hair down to his arse and plays bass in a band called Crooked Fang. I’ve been following some of his blog episodes for a while now, and just love the way trouble seems to find this often deadpan vampire who, as far as I can tell, just wants to play music, drink whisky and enjoy a bit of female company. The brainchild of Carrie Clevenger, Xan’s story will be officially published later this year with the added bonus of a soundtrack, which is a value-added offering of note. Part of what makes me get all wobbly-kneed over Xan is his attitude. I get the idea he just wants to get on with his existence without any wangst. Then there's the grit. Oh. My. Xan’s world is brutal and often bloody. If you like badass vampires with serious fangs and a penchant for muscle cars, look no further.
In case you were wondering, yes, I’m also writing vampires when I’m not dabbling in black magic or erotica in my fiction. But more on that later. You can get a small taste here: http://www.lyricalpress.com/store/index.php?main_page=product_info&cPath=96&products_id=394
Follow me on Twitter: @nerinedorman or go like my Facebook author page. C’mon. You know you want to… http://www.facebook.com/pages/Nerine-Dorman-author/173330419365374?v=wall
Posted by nerinedorman at 10:32 AM