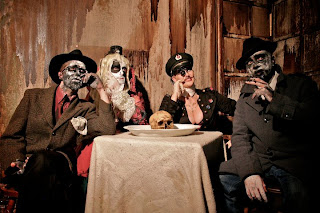 While I've been busy with my own deadlines, I've watched with some amusement some of the latest offerings the BlackMilk team is putting together. While they prepare for their next big film, Sunrise Hotel, they're keeping out of mischief with some short films for their fans' enjoyment.
The first is a short film they created after a night of messing around on musical instruments here at the Treehaus. The soundtrack, if you can call it that, is the result of the guys scaring our neighbours half to death.
http://www.youtube.com/watch?v=mGL9uh5lSiM
The second link leads to a short ad they did. I can't handle watching this one. Really. Scares the living bejezus out of me.
http://www.youtube.com/watch?v=mGL9uh5lSiM
Posted by nerinedorman at 11:12 PM