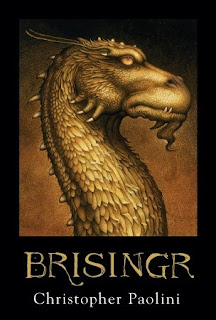 Ooookay. Paolini's going to string along the die-hards who're OCD about reading an entire series, and the same issues that dogged book two are present in book three. Not a helluva lot happens in Brisingr until right at the end. Lots of random battles, a new sword is forged, lots of details about the ongoing war. We find out some Top Secret Stuff about dragons that, predictably, comes into play and reveals a glimmer of hope.

Some of the writing is extremely clunky. Mine twitchy little editor's red
pen itched and itched for me to have a chance to do its thing.

But yeah... So I read this for the same reason that I'd probably read an exhaustive bit of fanfiction. Because this is still pretty much the plot of Star Wars smooshed with Lord of the Rings and Dragonriders of Pern. The writing is average. The characters and dialogue are passable.

My main gripe is the pacing... Lots of slogging to get to the exciting battle sequences at the end.

But what gives this story it's fourth star is the imagination. I like the world-building. I like the concepts Paolini plays with. They're not new, but they're fun, and I enjoyed this novel despite the obvious flaws. Deathless prose this is not. This is not the present era's answer to Tolkien, but I'm still motivated to find out how the heck Paolini's going to wrap up all the threads.

Personally, I think Eragon is an insufferable little Marty Stu, but I like Saphira, so I'll put up with his wangsting about who his daddy is.
Posted by nerinedorman at 10:10 AM