Tricks, Mischief and Mayhem with Daniel I Russell

I admit it, it's the cover that got me. So I had to get Daniel I Russell over here to talk about his latest release, Tricks, Mischief and Mayhem published by Crystal Lake Publishing. Welcome, Daniel!

The cover art image creeps me the hell out. Tell me more.

I picked the title of the book from one of the longer stories within, and while that piece is one of my older tales and quite self-indulgent (combining my favourite movie genres of haunted houses, clowns and toys), the title I felt that the title summed up the collection well.

The short story itself, Tricks, Mischief and Mayhem, appeared in a German anthology called Wicked, and each story had its own illustration by the artist Christian Krank. I loved the image as soon as I saw it. Has such antiquity and sinister tones!

When the publisher Joe Mynhardt first mentioned the cover art, this picture immediately sprang to mind. After some friendly negotiation we obtained the rights from Christian and away we went! Have to also give a dip of the big clownish bowler to Ben Baldwin who produced the layout and did a superb job with the creepy old theme. A lot of author collections have had an arty minimalist vibe of late, which I wanted to avoid. My book is like a trip through a creaky old funhouse and I wanted readers to get that from the cover.

Doing a retrospective of stories can be quite daunting, especially if your writing style has shifted over the years (which I assume it has). By what criteria did you pick the stories that eventually went into the anthology? Did you have any themes in mind? That being said, if you look over your body of work, what sort of development do you see in your writing? 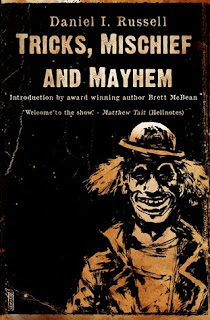 I go into detail over this in my notes, that the stories themselves are like snapshots of life at the time of writing: the places, the people, the thoughts. I wanted a complete, definitive collection of my first (of hopefully many) decades in horror fiction. This just wasn’t feasible. With so many stories to publish, the book would have been an epic volume. I think we looked into it, and the page count would have reflected such a high cover price that we decided early on that this was a no go, and cuts had to be made.

We looked at word counts and had a vague idea of how many had to be chopped. Joe and I discussed what we thought were the weakest stories and then requested the same from the beta readers. Everyone had different opinions!

Eventually we cut some of the more traditional horror subgenres. Penanggalan! was cut, a vampire story that lost us some 10k words, and a werewolf story and a Lovecraftian tale followed. We still weren’t happy with the length, but after some formatting wizardry, Joe managed to get it under 500 pages. Just!

I definitely see the development, as I’m a very different person now as I was at twenty-three. The need to shock and disturb is still there, but I’m slowing down a bit with the execution and utilising less of the red stuff. More events happen now of the page at times with more heart-wrenching results (for example, in the story Devolution). I also have a drive to write in varying styles and don’t shy away from some heavy research sessions before starting a story.

If you had to pick three of the anthology stories to discuss, which would they be, and why have you picked them?

I thought about this question and wondered which stories would show my development as a writer, or which of the tales has had the most success before being compiled. Then I thought nah, I’ll just go with my favourites!

The Love Revolution was written under a very tight deadline, and is one of those pieces that you think is rushed crap when you get the words down but then it grows on you. I also have a bit of a dig at the new wave of popular romance books and chick lit, which is always fun, and combine it with some of the most obscene images I’ve ever created. I had serious reservations when I submitted this, but thankfully the editor loved it. Sick puppy.

Seeing the Light is what many may consider a traditional zombie story. While I enjoy zombies, there has certainly been a danger of industry saturation of late, made obviously apparent with publishers requesting horror…but not zombies. I always try to do something different with traditional genres, and Seeing the Light is no different. A surprisingly feel good zombie tale.

Finally, the closing story, God May Pity All Weak Hearts. As I mentioned above, I don’t shy away from research any more. This story was way, way out of my comfort zone. Written as a series of diary entries at the turn of the twentieth century, my usual no-nonsense approach wouldn’t have floated. I did extensive reading of work from the time, to the extent of reading letters written by the real life protagonist to capture his voice. I’m usually too hard on myself when I judge my work, but I’m proud of this story.

What sort of feedback have you received from reviewers/readers so far?

Joe has prepared a blog post with a collection of the early reviews here.

Readers and reviewers have thus far enjoyed the collection. When the likes of Paul Kane and Hellnote’s Matthew Tait are giving you the nod of approval, you know you haven’t released a stinker! Hopefully soon the readers that bought on release day will be sharing their thoughts…

Quite a few pokers in the fire at the moment, which is unlike me. I like to finish one thing before moving onto the next. There’s a few short stories on the go being written for specific anthologies, and a new novel at halfway. I have a fourth child on the way, so I’m aiming to get a few projects off the desk before the big day!

Posted by nerinedorman at 10:57 AM