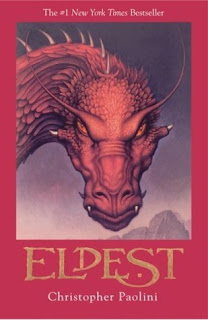 Okay, it's been quite a while since I read Eragon, so when Inheritance landed on my desk I reckoned I needed to brush up on the back list before I dove into book four. After all, I love dragons, love epic
fantasy. Now I do recall a lot of book reviewers and bloggers going on about how this saga is basically Star Wars with dragons, and a serious nod to Tolkien. And yes... they're right.

The elements Paolini blends so far as I can see in book two are very much Luke Skywalker goes to Dagobah to train with Master Yoda. And Eragon spends *most* of this novel either travelling or training... or pining after Arya. Perhaps the more exciting story arc is that of his cousin Roran, who shows a surprising transformation and leads the entire Carvahall in revolt against the Empire.

And Roran is the one who shows the most dramatic changes, turning from the dull farmer to the unlikely hero who ends up (unsurprisingly) playing a pivotal role near the end. There was only one plot point that really bothered me and that was related to why the Ra'zac didn't succeed in taking him when they had that chance. That part felt a bit contrived.

The main point that bothered me about this novel was the pacing. The first 75% is SLOW. Very, very slow. Sure, there's a lot of fascinating backstory *if* indulging in copious amounts of history a la Silmarillion is your thing. I was sufficiently invested to deal with it, but yeah... Things only started getting exciting when battle was imminent.

Eragon as a character is a bit flat. He's the archetypical hero who's impatient, stubborn and allows his emotions to get the better of him. I suspect Arya will still be his Achilles tendon later in the saga, but she's definitely a massive chink in his armour.

My verdict... The story isn't perfect, but for die-hard fantasy fans it's probably going to be sweetcakes. I admit I enjoyed it despite itself. Paolini takes existing tropes and he puts his own spin on
them. This isn't a *great* novel but it's a fun novel, perfect for a holiday read or to while away the time while commuting, like I did.
Posted by nerinedorman at 12:31 PM