Six of the best with Tal Valante #books

Today's guest is author Tal Valante, and she's sitting in the hot seat today to endure Six of the Best here at my spot.

You're at a party, and some random stranger finds out you’re an author. You’ve got less than thirty seconds to explain to them what Mindscape is all about. Go! 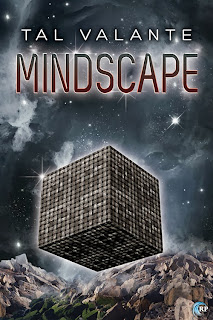 Mindscape has space battles and an intergalactic war and the courage to serve something bigger than you are. But it’s not about that. It’s about how a man sets out to win the love of his heart. And how, once that love is won, his lover sets out to fight for it against an enemy no one could have imagined. It’s about the physical world and the mental one, and how they dovetail, serving both as a battleground and as the cradle of a great love.

It’s about the small things in life, set against a backdrop of sweeping events. But above all, it’s about two people that belong together and how far they’d go for love. And yes, I can say that in 27 seconds flat.

Tell us more about Mark and Shane’s world. What do you love about the setting and how it shapes them?

I love the concept of having a mindscape: a world with scenery and life that reflects our mental states, and can be shared among two people who are in Resonance. I like the idea that somewhere in the world is a person so attuned to you that the two of you can share much more than words. It feels to me like a natural extension of what we humans already have.

I think that mental bond affects Shane more profoundly than Mark. Shane is a man of rigid masks and control, and in comes this brilliant young fellow who can – literally – see past these things. It’s a new experience for Shane, one that gives him a measure of freedom that he’s never known—the freedom to simply be himself and be loved for it.

What are some of the themes that you treat in Mindscape? Can you share a little about the story seed that sparked off this tale?

Not without completely ruining the punch line, I’m afraid. Mindscape has started with the climax scene fixed clearly in my mind. The rest was background work, though quite enjoyable. In Mindscape, I tried working with themes of the little man against a backdrop of great events, of the meaning of serving in the army (or space navy, as the case may be), and of the world as we perceive it versus the way it really is.

I also gently explore some reaches of mental instability, and the dynamics of love. It’s an interesting combination that has drawn me before (in All My Crimes) and which I love to explore.

What do you love most about the genre that you write?

The freedom. The absolute, unmitigated freedom. And the paradoxical fact that building a story is all about limiting that freedom in new, interesting ways. Without limits you only get chaos. With boring limits you simply get our world again. But with strange, new limits you can get rich and brilliant worlds that are a pleasure to explore. The more you trust yourself to your invented limits, the more real and authentic the story will read. It’s a little like the paradox of true love – you choose to be chained, and because it’s of your choice, you are in fact free.

Dare I ask about Assassin’s Creed, which you mention in your bio? What do you enjoy about the game?

Oooh, gutsy! I’ll do my best to be brief(-ish). There are two reasons I love this series of games. The first one is the plot. I always feel like I’m reading an interactive book. The first time I sat down to play Assassin’s Creed, I accidentally played it for 27 hours straight – simply because I had to know what happens next.

The third game (Brotherhood) sucked me right in. In the fourth game (Revelations) I actually cried at the end, and I’m talking full fledged sobs here. The story is gripping. The characters are brilliant. There’s a reason AC is a highly active fandom with lots of gorgeous, well-written fanfics (and tons of slash to boot).

The second reason is that I really enjoy creeping up on people and killing them.

What’s currently on the boil with your work in progress? What can your readers expect from you during the next few months?

I have a confession to make: I write slowly. Imagine a crippled snail swimming in half-dry cement. I write even more slowly than that. That’s why it’s been so far between All My Crimes and Mindscape, and why it would probably take me a good while before I finish my current work in progress: In Shadows Made.

What can you expect from In Shadows Made?

Well, it’s a cross between epic fantasy, kinky romance, and a thriller. It’s the story of a young blacksmith and a great lord, set in a world ruled by two god-kings. One story arc is “from enemies to lovers,” which I greatly enjoy writing.

Like Mindscape, it deals with what the world seems to be and what it actually is, and with the question of how far a man would go for the sake of love. It also plays with the theme of masters and slaves. That’s all I can give you without betraying critical details.

Mindscape will release on December 23.

In brief...
The truth will set you free.
Mark Sayre joins the Interstellar Navy for the money – his only goal is to keep his little brother out of the colony mines that sent their father to an early grave. With concepts like duty and honour floating high over his head, he hardly expects to fall for the serious, idealistic Shane Cawley. Not to mention that Shane is his commanding officer... and his Resonance partner, a one-in-ten-thousand mental connection so profound that they can travel in each other’s mindscapes.

Shane Cawley is carrying on the family tradition by serving in the Interstellar Navy. He hardly expects to fall for the quirky, happy-go-lucky Mark Sayre. But as the Resonance between them grows, neither can deny what he feels for the other.

When war breaks out, Mark and Shane find their military training and their Resonance link tested to the edge of sanity. Shane is haunted by memories and flashbacks, and Mark becomes trapped in his own mindscape. But with help from an unlikely ally, they may be able to salvage their futures and the love they share.
Posted by nerinedorman at 9:59 AM