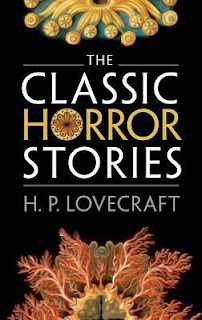 HP Lovecraft is best described as the grandpappy of a genre that can be (un)comfortably labelled as Lovecraftian horror or as falling beneath the banner of the Cthulhu mythos. This particular brand has extended its many-tentacled nastiness into mainstream media, spawning comic books, films and even role-playing games.

If you’ve ever watched Alien, The Evil Dead, The Thing or Dagon, you’ve brushed up against Lovecraft’s legacy. And these are but a few of the better-known end results.

While diehard fans might be disappointed in the selection editor Roger Luckhurst presents in this collection, The Classic Horror Stories will offer newbies an opportunity to sample a range of Lovecraft’s writing in one volume. Some classics, such as The Call of Cthulhu, The Dunwich Horror, At the Mountains of Madness and The Shadow of Innsmouth are present, and Luckhurst includes exhaustive notes in the appendix, which help establish context (useful, if you’d like a little more background). The introduction will offer insight too.

My feelings about HP Lovecraft remain, as always, conflicted. His prose is ponderous, stilted and at times so flowery and dense that it’s impossible to read large sections of his writing in one sitting. To say that he was an eccentric is putting things mildly, and his misanthropy and fear of the other is glaring – amply reflected in the personal isolation of his characters.

Yet he offers a peculiar kind of allure. Mankind is but a fly speck in the greater scheme of things. Our existence inhabits a thin sliver of reality as we know it, and for us to consider that we are more is nothing but conceit.

In the face of Lovecraft’s vast, ageless entities and ancient aeons past, there is no hope for the human race. And those who wish to pry into the mysteries are often rewarded poorly as they try to assimilate their discoveries.

Once you read a handful of Lovecraft’s tales, you are faced with similar themes of gradually unfolding horror in which characters often become enmeshed, unable to extricate themselves from the often ghastly revelations. How the luckless narrator responds to his dilemma has only one of two options: death or madness. Connoisseurs of dark and dismal tales will, however, find this process oddly compelling.
Posted by nerinedorman at 11:51 AM