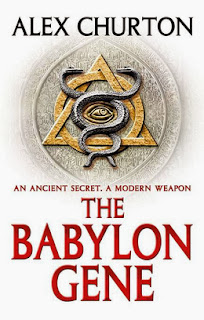 Freemasonry certainly provides a fascinating theme to treat in fiction, and it’s clear that Churton is knowledgeable about his subject. Equally fascinating is the Yezidi tribe – an ancient culture predating Islam that has often faced persecution – and it’s obvious Churton has done his research on the topic here too.

Added to this heady mixture is contemporary Middle Eastern conflict – terrorists, dodgy super-scientists and military action – all with plenty of explosions, bullets flying all over the place and the prerequisite bloodshed.

Enter Toby Ashe, our suave, brainy British secret agent. James Bond has nothing on this intellectual. As he is part of a special task force that deals with what they term “oddballs” – essentially a licence for them to indulge in conspiracy theories and solve global mysteries.

Right now he has his hands full looking into the bombing of a Masonic lodge in Istanbul, and very soon he’s wading through an international situation involving illegal genetic research and terrorism, all laced with a healthy dose of religious fundamentalism.

This is Churton’s first novel, and it shows. While he’s previously published non-fiction, and is evidently a gifted scholar, this hasn’t translated as successfully into fiction. Granted, if you’re completely drawn into the aforementioned topics of Freemasonry, Yezidi culture and international espionage, you’re probably not going to be bothered by the massive chunks of exposition Churton inserts throughout the novel.

By contrast, there are parts where the text is stripped down to snatches of dialogue that imply that there is some sort of action happening, but it’s left to our imagination. This adds distance to a story, which might work just fine in film but doesn’t translate well to fiction.

The bottom line is that The Babylon Gene suffers from a serious case of “Too Much Awesome” – Churton tries to take on too much instead of focusing and building on a narrower band to produce a tighter, more engaging novel.

There’s some good stuff here, but it gets lost in the crossfire.
Posted by nerinedorman at 11:36 AM