I've had the opportunity to read one or two of Nick's short stories, and he really has a lovely way with words, and his great love for Africa is very apparent. So, without further ado, I welcome him over to my blog today. He's going to chat about his short story which appears in the Something Wicked Volume 2 anthology. Welcome, Nick!

Tell us a little about your short story.

Of Hearts and Monkeys (OHAM) was inspired, if that's indeed the right word, by stories of 'corrective rape' in South Africa. I wondered what could I write, that might challenge the dreadful discourses around this practice and the practice itself, but within a story, and not in an obviously didactic form? The story didn't arrive at first, though - initially it was as if someone was whispering something to me - and, on one particular walk along a Silvermine Nature Reserve track in the mountains near Muizenberg in Cape Town, the voice grew stronger on the South Easter breeze and I could 'hear her’ more clearly, all of a sudden. (‘Her’ being Noluthando Ngobo Bhele, telling me stories.) 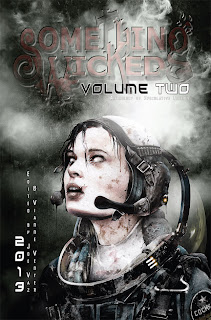 Passion and grit. Passion when I feel my blood stirring about something and I know I need to write it out somehow. Grit, most of the time, when I force myself to write, despite being tired and in pain - knowing I can't wait for passion, if I'm hoping to be good enough to be read a bit more widely one day.

What do you think are particular challenges associated with short stories as a form?

Making sure each word is absolutely necessary and layering the story so themes are harmonized and integrated, *perhaps* even eventually enabling a one sentence summary of the essence of the story. That way, you have a stronger sense that the story is sharp, focused and has meaning that you wish will end up resonating with a reader, long beyond the reading. That takes a lot of redrafting and where editors are often invaluable - Vianne Venter gave me some great tightening advice at various points of OHAM.

As for longer works, do you have anything planned?

I've written part of a YA book set on the moon, a chapter of which won the Accessible Futures Award and was published in Redstone Science Fiction. As a 3rd book option; I really want to follow MamBhele further along on her journey, above and beyond OHAM and the denuded Western Cape.

The so-called gospels, including the apocryphal ones such as St. Thomas, which was highlighted epigrammatically in RD Laing's The Politics of Experience and the Bird of Paradise. Jesus remains an enduringly inspirational character to me, although I am allergic to organized religion and the dogma that has ossified over hundreds of years to - in my opinion - effectively strangle him. I used to have an old hippie book around Jesus the Revolutionary, which spoke about the radical nature of his teachings, including the call to get involved in socio-political protest/change. He is Jesus the Jew too - and, as some say, perhaps likely to have been a 'black' (or at least dark) Jew, i.e. an 'Other', but who has subsequently been co-opted by conservative white Western ideologies. I think the 'gospels' stand out for me, because they are still in many ways moral, fresh and radical - that's if you can decouple the books from their organized religious trappings and aspects of its imperialistic history. Apart from the gospels, the Revelation of St. John is a fantastic source for Fantastika!

The fragility of the human body. I've been learning a lot about that these past 6 years and am only now slowly learning to partially live with it. I read an interesting debate between a Westerner and a Buddhist a while back, both with major chronic health problems - they argued around the use of 'hope'. The Westerner said it was what kept him going. The Eastern Buddhist said hope implies a lack of acceptance of the now and a painful yearning for something better. I realized then, much though I like to stretch the boundaries of my own cultural conditioning and experience, I remain a Westernised white English speaking South African male, who just writes in hope for an even 'better' world to come.

Posted by nerinedorman at 11:55 AM