The Song of Achilles by Madeline Miller #review 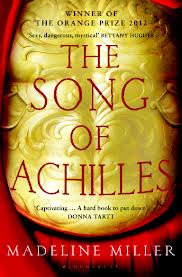 I’ll admit from the start that I’m a huge Mary Renault fan, so when Madeline Miller’s The Song of Achilles came up on my reading pile, I recalled The Persian Boy and devoured Miller’s offering from cover to cover in less than a week. Like all mythological tales, this one is a tragedy and, I felt a lump in my throat and was a bit teary-eyed at the end, even though I knew how the story of Achilles would conclude.

Miller breathes life into the legend, in an historical retelling that incorporates some of the magic of ancient times. Immortal Chiron the centaur and Thetis the sea nymph are clothed in flesh and walk among mortals.

The gods are real, easy to anger, difficult to appease, and are as bloodthirsty and manipulative as ever. The stage is set, and the tale is told by Patroclus, a disgraced prince in exile, and how he becomes the favoured companion of Achilles, who was destined for greatness. As narrator, Patroclus exists as the opposite of  golden Achilles, who oozes charisma, beauty and near-divine physical prowess on the battlefield. Utterly devoted, and despite Thetis’s hatred of him and others’ disapproval, Patroclus follows Achilles no matter where he goes.

Achilles is faced with two fates: to live a long life and die old and in obscurity or to flare, briefly and be immortalised in legends. Well, there wouldn’t have been much of a story if he’d chosen the safer option, now would there?

Miller’s prose is lush, sensual and evocative, and she captures this age of heroes perfectly to the point where you can taste ripe figs or smell the stench of blood on the battlefield. Miller’s characters spring forth into startling life from the pages of one of the greatest legends.

This review appeared in the Pretoria News on February 17, 2013

Posted by nerinedorman at 11:33 PM