The Taker by Alma Katsu #review 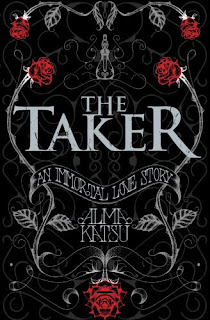 If Interview with the Vampire and Wuthering Heights were your thing, then it’s safe to say The Taker will be right up your alley. Alma Katsu gradually unfolds her saga, revealing mystery upon mystery within a lush setting that spans centuries.

We are introduced to Lanore McIlvrae, a young woman who lives in a Puritan settlement and bears an impossible love for Jonathan St Andrew, the son of their small town’s wealthy founder. Contrary to my initial expectations, the love between the two was largely a one-sided affair – an all-consuming obsession, really.

I muttered quietly to myself: “This will not end well,” and continued reading. Lanore will stop at nothing to possess Jonathan. Her entire being is so focused on him that it precludes any rational decisions. But fate conspires to take Lanore away from rural Maine to Boston, where her path crosses with that of the decadent, cruel Adair and his entourage. Here she stumbles across a dark alchemical secret – one that offers her the hope that she might have her darling Jonathan with her forever.

Katsu offers a prose style that harks back to the classics, and the narrative of this novel shifts between the present, past and remote past. Readers are voyeuristically brought in near the conclusion of a tragedy. But the anticipation of revealing the mysteries that lead up to this point make this enthralling.

A warning: None of the characters are likeable. Lanore’s motivations are purely self-centred and short-sighted. Jonathan is a self-absorbed cad. Adair is a manipulative monster, and the assorted support cast are wicked and, in the case of the secondary narrator, Luke, weak-willed.

Yet, somehow, this brokenness of the ensemble works well together in their ill-at-ease relations. Much like Heathcliff or Lestat, Lanore is a creature who is simultaneously worthy of pity and admiration, and as much as one is apt to hate Jonathan or Adair, it is all too easy to fall under their spell. Lovers of the gothic novel need to perk up and indulge in this series – Katsu’s writing will hit all the right marks.

Posted by nerinedorman at 10:53 PM