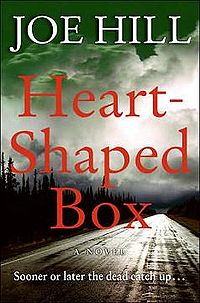 I am not going to bitch and moan about Joe Hill not being as good as his father, Stephen King. Joe is not Stephen, and nor do I expect him to live up to those expectations. Did I enjoy this novel? Yes. Was I scared? Not really, but I thoroughly enjoyed the story. Was the tale mind-blowingly original? Not really, but Joe certainly knows how to construct a story I felt compelled to finish.

Heart-Shaped Box contains all the elements I enjoy: references to rock ’n roll, somewhat jaded musicians, beautiful goth girls with pasts… and ghosts. In this case, a vengeful, malicious father hell-bent on avenging his daughter’s death.

Judas Coyne has picked himself up by his bootstraps. Though he started life as a pig farmer’s son, suffering at the hands of an abusive father, he has carved out a career for himself and has become a legend, probably comparable to the likes of Ozzy Osbourne and Mick Jagger. But he lives the life of a recluse on his farm, perfectly happy with his much-younger ex-stripper girlfriend and his two dogs. Or at least he fools himself into thinking he’s content, but from what I can gather, he’s purely going through the motions, goaded by mild regrets and a general jaded approach to his rather eventful life.

And perhaps this inability to connect emotionally with his present is Judas’s greatest sin – which he pays for once things go pear-shaped. And you might as well bring on pears by the barrow-load once Judas makes the mistake of adding a dead man’s suit to his collection of the macabre and arcane. He doesn’t expect much to happen when he buys the dead man’s suit, but ghostly happenings soon take on a murderous bent. Judas is forced from his comfort zone and embarks on a road trip, not only to try stop the ghost and clear up matters pertaining to his ex-girlfriend’s death, but also to face his own past.

While Heart-Shaped Box didn’t quite have me sleeping with the lights on, the story definitely has its moments where I was highly uncomfortable (which is great, by the way). Although it’s a bit slow-moving at times, Joe nevertheless knows how to notch up the creepiness factor while blending in the mystery pertaining to ghosts and the afterlife.

Posted by nerinedorman at 11:37 PM