The Master and Margarita by Mikhail Bulgakov #review 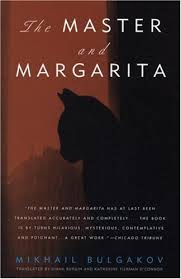 I have mixed feelings about this novel. On one hand, I really enjoyed its light irreverence, but on another, I feel that I missed out on much of the meaning behind the context. This is purely due to cultures, and there is a vast difference between Soviet-era Russia and post-apartheid South Africa.

Mikhail Bulgakov never finished editing this work, so we'll never know what the final results would have been like, but from what I read it was also written by a creative who had experienced a lot of hassle at the hands of political leaders who sought to tell artists how and when to create their works.

Naturally, much of Bulgakov's frustration with the socio-political systems of his day bleeds through the story, but also the fact that he is a keen judge of human character--and this is what this book is: an exploration of human nature in a sometimes highly surreal and seemingly random setting. Bulgakov's imagination takes playful leaps, embroidering recurring symbols throughout. I also feel how we interpret these fanciful routines and playful satire within the stories is completely up to the reader.

That being said, I'll admit freely that most of what occurred went well over my head, but I'll add that I'll probably have much to think about while this story is still fresh in my mind. The scenes between Pilate and Jesus were quite poignant, and seemed more grounded in reality than the goings on in the general narrative. Margarita's mad flight on the broomstick was particularly wild, as were the actions of Behemoth. Bulgakov holds up a mirror to people's hypocrisy, and finds the sense of ridiculousness in everyday occurrence that we accept and take for granted.

This is the first time I've read the book and I can see there is definitely *something* there otherwise people wouldn't go on about the book so much. But I also suspect I'll have to read a little more Russian literature so that my cultural references are more up to scratch. Maybe with subsequent rereads I'll "get" more of what is going on. What I did appreciate was that each chapter was almost a standalone tale in itself, which made it easier for me to work through the story.

Posted by nerinedorman at 11:13 AM