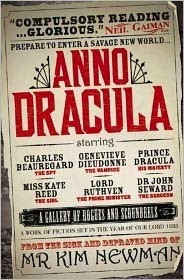 The first time I picked up this novel it didn’t quite stick. I think I was still in my early teens so in hindsight most of the references and interactions would have gone way over my head. I’m glad that I’ve given Anno Dracula another shot, mainly from a research perspective in the genre. On one hand, Kim Newman has a prodigious understanding and love of the vampire genre, of which I’m in awe. Anno Dracula serves as a fitting homage to vampires in popular culture over the years and Newman is adept in painting a thoroughly dystopian Victorian London.

But… And there is going to be a but. Pacing and tension. We are, from the beginning of the novel, well aware of Jack the Ripper’s identity, which robs the story of a lot of its tension. It’s not so much as *who* the murderer is but *how soon* the characters uncover his identity, but even as he continues in his actions, Charles and Genevieve, our two protagonists, sort of bumble along. They pay lip service to their investigation while spending more time staring into each other’s eyes. That they’re going to fall into mutual fascination is charming and inevitable, and the difficulty presented by a mortal/vampire relationship is unavoidable.

The biggest stumbling block I faced with this novel is that it doesn’t really move and, once the crime is solved, the plot takes a sudden twist into unexpected territory, with very little build-up to suggest this as the possible alternative. I’m tempted almost to think that the ending was latched on. I mean, it’s not an implausible conclusion but I would have liked a bit more foreshadowing and felt that the Jack the Ripper story arc was a bit of a red herring to mask the actual ending.

Yet, what I did like about Anno Dracula was seeing the assorted literary characters have their little cameo appearances. Even Anne Rice’s Lestat (and I’m wondering if she’d have a conniption fit about this considering her attitude toward other writers appropriating her darlings in fanfiction).

This very habit of populating his novel with existing personalities is also Newman’s weak point. While it’s certainly fun seeing how many of the characters I could recognise, this also meant that the focus of the novel is diffuse – hence the massive pacing issues. Consequently it’s also difficult to become emotionally invested in any particular individual.

The world-building, however, makes up for the pacing. Newman goes on to show that vampirism only serves to accentuate social ills. The unintended consequences are not pretty. Newborns from the lower classes suffer even more than before – and further divides are introduced into the community – that of the warm and the turned. (This makes me think a lot about how affirmative action and cronyism is affecting contemporary South Africa.) A new class is emerging with its own brand of discrimination as vampires rise in power and favour others if their kind. This is a fascinating social dynamic to examine.

The premise of Anno Dracula is fantastic. Newman begins with the question of “What if Dracula wasn’t defeated by Van Helsing and co?” In Newman’s milieu, Vlad Tepes has taken temporal power by turning Queen Victoria and becoming the prince consort. Vampirism has become de rigueur, and the British Empire is at the peak of its power. (Though it’s quite clear that there’s something rather rotten at the empire’s heart.)

Jack the Riper is at large, only he’s targeting unfortunate vampire prostitutes instead of warm women. Vampires from all over are flocking to London now that their state of being has been offered a veneer of respectability – and this uneasy, unnatural situation is slowly fomenting social discord.

Charles and Genevieve are lovely, complex characters, and it is easy to grow quite fond of them if you can deal with the polarised focus of the novel, as well as its uneven pacing. If you are a die-hard fan of the vampire in literature, then you should definitely consider giving this one a chance – a worthy read.
Posted by nerinedorman at 11:24 AM